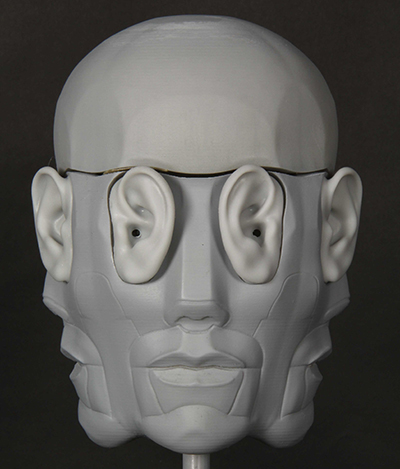 Virtual: 1. being something in effect, though not so in name; for all practical purposes; actual; real.

Virtual Audio: 1. sound that is specially processed to contain significant psycho-acoustic information to alter human perception into believing that the sound is actually occurring in the physical reality of three-dimensional space.

This month, I would like to talk about the different ways the Virtual Audio Processing System was used to process audio into a spatialized sound field. This system was very advanced for the time (1991) and the results still stand up remarkably well today. Please read “Out Of Your Head Part 2” for the hardware background information on the Virtual Audio Processing System.

WHAT IS VIRTUAL AUDIO?

Virtual Audio is a process of encoding audio in three dimensions, passively or interactively. Virtual Audio requires no special decoding equipment and provides a very accurate model of our hearing process. Virtual Audio is so accurate that the listener cannot distinguish Virtual Audio recorded sound from reality. Playback can be experienced on stereo, surround speakers or standard headphones.

Since the brain is trying very hard to decipher different sounds unsuccessfully, a type of stress is induced. The medium of standard audio technology itself actually induces stress. This stress will inhibit the listener from being emotionally involved with the audio cues optimally. With the use of Virtual Audio, the natural phenomenon of selective hearing is retained in the recording process.

Virtual Audio encoded material inherently contains much more information to be processed by the human brain than normal audio. The result is greatly enhanced communication and emotional response from the recording by using Virtual Audio technology. When recording the sounds of nature or music, the use of the Virtual Audio process is very important, and in fact, fundamentally necessary for relaxation, meditation and the relief of stress.

Since a majority of my current work is using sound to expand consciousness, understanding this information cannot be underestimated. All my work has to be encoded into 3-D as a fundamental requirement.

The basic procedure of using the Virtual Audio Processing System (VAPS) in the recording process involved sending a mono audio source through a channel of the VAPS computer and then positioning the sound in a 360 degree space. Instead of the traditional panning of the left/right stereo field, VAPS allowed a 360 degree panning capability. VAPS also allowed the construction of each wall of a Virtual Room as well as the ability to locate those walls anywhere in a 360 degree space.

For the recording artist, producer or engineer, an understanding of the VAPS recording process is necessary for the best results. There are five basic levels of processing. At the higher level, a Virtual Audio environment can be created that is indistinguishable from reality. At the lower level, the result is Spatially Enhanced Stereo (SES), which has much more width, height, depth and clarity than the original stereo recording. Listed below, from elementary to complex, are the five levels of VAPS processing:

The first level of processing is called the SES Process. This process involved taking a two-track finished master and processing it through the VAPS. A two-track recording could be processed in such a way that the width is expanded past the stereo speaker field. The depth and clarity were greatly enhanced. Vertical information could be heard as well. The feeling of being immersed in a 360 degree sound field was presented on headphones. The exact translation of the sound field is directly proportional to the production characteristics of the recording. This process was very easy, fast and very affordable.

The second level of processing was called the SES Mix Process. This process is similar to the SES Process except it is done at the actual mix stage of the recording. The VAPS was placed on the stereo output of the mixing console before the two-track recorder. The advantage of this method is more precise control of the placement of each sound source in space. By having more individual control of each sound source, a more three-dimensional recording can be accomplished. This process was very cost effective for professional recording.

The third level of processing was called the SES Mix-Plus Process. It is a combination of the SES Mix Process and the Multi-Track Process (see below). The advantage of this method is that it still has the time and cost effectiveness of the SES Mix process, with the addition of three-dimensional room simulation and special effects such as sound moving around or over your head. The motion of individual sound sources is possible. The SES Mix-Plus Process was used for professional recording when special effects are desired.

The fourth level of processing was the Multi-Track Process. This process allows individual control of each sound source as well as three-dimensional room simulation for each sound source. The Multi-Track Process is the most advanced of the Virtual Audio processes. It does require more time than the other levels since much more detail is possible when locating sound sources and designing virtual room spaces. Using this method, proximity effects can be created. Proximity is the effect of sound moving close and moving away from the listener. The Multi-Track Process was used for professional recording applications where the most control and effect in creating realistic Virtual Audio environments was required.

Like the VAPS computer, Virtual Audio Live Recording was totally compatible on speakers and headphones. This method was very easy, convenient and was cost effective.

All levels of processing were completely compatible with each other. Any combination of these different processes will combine with each other without any artifacts such as phase shift or smearing of the audio image. All the Virtual Audio processes were compatible in mono. Although the Virtual Audio effect cannot be achieved in mono, the clarity and intelligibility of the sound sources could be dramatically improved.

By understanding these different levels of processing, the end application and the playback medium (speakers, headphones, surround-sound systems, etc.) would insure the optimum result using the VAPS computer.

Imaging was excellent, including depth and height whether playback was in the usual equilateral-triangle stereo listening situation or in a narrow-stage arrangement, such as loudspeakers flanking a television screen. Listening area was wide, without sharp sweet-spot limitations.

A good approximation of a Virtual Audio presentation could be made available by using four loudspeakers: a front pair and a pair to the sides or behind the listening position. The second pair received the same signals as the front pair, at a slightly reduced level. No signal processing was required.

Headphone listening of Virtual Audio was excellent, and a complete 360 degree immersed sound field could be obtained. Virtual Audio removed the annoying “in the center of your head” feeling that is common with headphones and exteriorized all the sounds outside your head.

Mono playback was also not compromised due to the amplitude and phase flatness of the VAPS technology. Although the spatial quality was lost, intelligibility was greatly enhanced.

When mixing-down several sound sources recorded on a multi-track recorder, VAPS could be used on every track to design a sound field particular to each sound source. These various tracks where then mixed down to a normal two-track stereo master. The master mix could then be used directly for CD recordings, video sound tracks, or stereo broadcasting on TV and FM radio bands. Home audio enthusiasts could enjoy an unsurpassed Virtual Audio environment on their conventional stereo headphones or speakers, hearing full reproduction of the artist’s or producer’s original intention. Another notable application of Virtual Audio was in the manufacturing of video and multi-media software for the consumer market. These types of products could offer Virtual Audio sound tracks, which recreate the effects experienced in a movie theater with amazing realism.

I created many more special techniques for spatialized audio such as a biofeedback system to help focus attention on specific brainwaves to advance the healing process of disease such as cancer. I also designed a system to use spatial sound techniques combined with ultrasound to help blind people see/hear their environment. I assembled all that data and applied for a patent in April 29, 2002. You can check the patent info here:

Over time, as computer power became more available and software more accessible, the VAPs concept evolved radically. Today, in my recording studio, I am using proprietary software on a new MacPro platform to render 3-D spatial environments. I am using a HeadAmp Blue Hawaii electrostatic amplifier with two Stax SR-009 electrostatic headphones along with an Antelope Zodiac DAC for critical monitoring. The software allows me to build virtual rooms using computer graphic modeling and design the acoustic properties of each room in 3-D. This system is far more accurate and detailed than the original VAPS. The original VAPS could only render 4 channels of spatial sound in realtime. The new VAPS can render up to 256 channels in realtime! The original VAPS could only process audio at 24 bit at 44.1 kHz and 48 kHz sample rates. The new system allows me to process in 32 bits and up to 192 kHz sample rates!

Next month, I will discuss my current Virtual Audio Processing System in more detail.

See you next month here at the Event Horizon!

You can check out my various activities at these links:

Or…just type my name Christopher Currell into your browser.