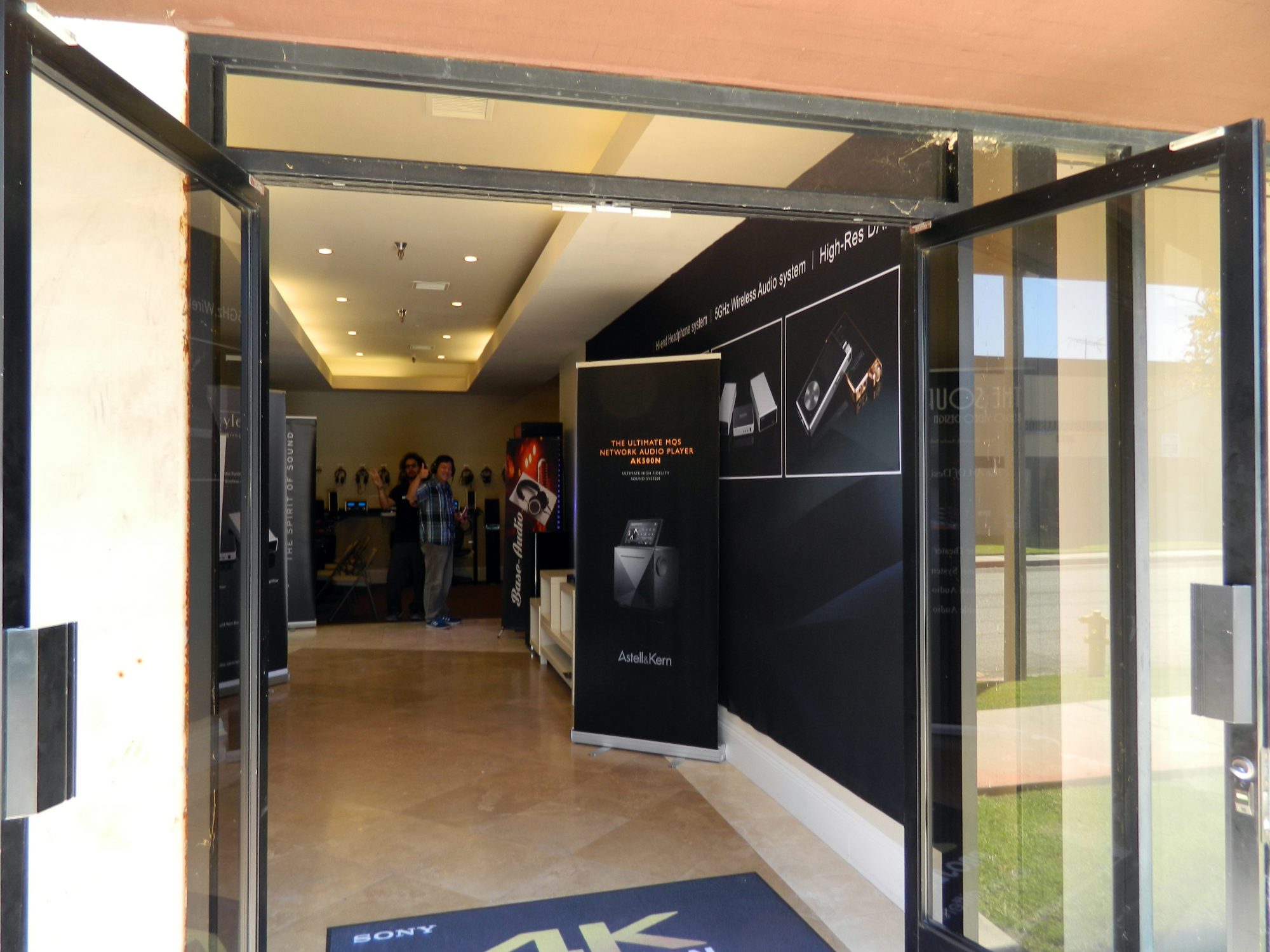 To provide entertainment while you waited for your appointment, Questyle Audio, HIFIMAN, Cavalli Audio, and HeadAmps all had provided displays of their fine equipment to listen to, as well as The Source AV Design Group’s stunning array of headphones, headphone amplifiers and DACs.

At the Questyle table I got my first ever look at the brand new Questyle Audio CMA400i True DSD/Current Mode Amplification DAC/Headphone Amplifier (TBA), the first desktop unit designed specifically to accommodate IEMs with a 2.5mm balanced output and selectable gain switches.

To show what state of the art dynamic headphones are capable of, Questyle was demonstrating the Focal Utopia Headphones ($3,999) with their amazing Questyle Audio “Gold Stack” Reference system ($12,500).

Also on hand was Sony’s reference system consisting of the Sony TA-ZH1ES Headphone Amplifier ($2,199.99), Sony NW-WM1Z DAP ($3,199.99) and Sony MDR-Z1R (2,299.99), featuring Kimber Kables’ new .17″ balanced connections, introduced as a more reliable and better performing alternative to the standard 3.5mm and 2.5mm balanced connections in current use on most portable units.

In addition to the SHANGRI-LA, HIFIMAN provided their soon to be available HIFIMAN Edition 6 Headphones ($6,000) and HIFIMAN EF1000 Headphone Amplfier for a glimpse at what they feel is the best in planar magnetic headphones.

Not to be left out, Cavalli Audio had their Liquid Tungsten Headphone amplifier available with a myriad of state of the art planar magnetic headphones.

Electrostatic headphones are the “supercars” of the personal audio world. That is to say, though there are many very fine dynamic, planar magnetic and balanced armature (primarily IEMs) headphones, when it comes to speed Electrostatics are the fastest. I hear you asking “what’s speed got to do with it?” Speed is the core of accuracy. It’s what makes a bass note tight, a drum pop, it lets you hear the rear wall reflections, the exact placement of the instruments (the air around the instruments), the micro harmonics that let you hear the difference between two similar sounding instruments, and all the other little subtleties that make it sound like you are in the room with the musicians. Electrostatics aren’t for everyone, they have limited dynamic range and efficiency (which limits overall volume and often limits low bass extension), but music reproduction is a world of tradeoffs, especially for personal audio, and those who love Electrostatics are never completely satisfied with anything else.

First on my list of appointments was the STAX SR-009, which as the long standing standard for Electrostatic headphones, was being offered with three different amplifier configurations, two hybrid systems and one pure tube. And first on the hybrid front was a solid-state preamp with a tube amplifier; the Questyle Audio CMA800P Golden Current Mode Pre-Amplifier ($3,500) driving a STAX SRM-007tII Electrostatic Headphone Amplifier ($1,730). The sound was magical with excellent detail and soundstage, and more bass extension than I expected.

Almost in counterpoint to the event, MrSpeakers was demonstrating their new $799 AEON Planar Magnetic Headphones along side of the MrSpeakers ETHER E Electrostatic Headphones as if to say “you can still have world class sound on a budget.”

The combination of the MrSpeakers ETHER E Electrostatic Headphone, the HeadAmp Blue Hawaii Special Edition Electrostatic Headphone Amplifier and the Chord DAVE FPGA DAC ($15,500) were without question my favorite sound of the event. By sacrificing a little efficiency Dan Clark has been able to wring greater dynamic range, a more linear tonal balance and deeper bass extension than normally associated with Electrostatic headphones.

Pure art is the only way to describe the HIFIMAN SHANGRI-LA. Though a little brighter than to my taste, it is an epic statement piece, with spectacular sound.

The Sennheiser HE 1 Orpheus

As the crowning piece of the event, the Sennheiser HE 1 Orpheus screams no compromise High-Tech German Engineering. The fully self contained DAC, Amplifier and Headphone gave flawless if not gripping sound.

All and all the event was entertaining and enjoyable, while 15 minutes is certainly not enough time to make critical evaluations, it does give you that little taste, that little glimpse into heaven, that makes you want to come back for more. Here’s hoping that The Source AV Design Group continues to hold these great get-togethers supporting personal audio as it should be treated.