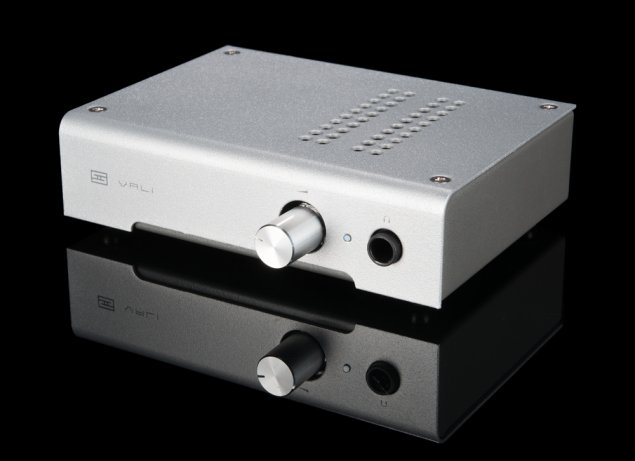 The Schiit Vali is the 4th piece of Schiit I’ve laid my hands (and ears) on. I’ve always been a fan of Schiit’s marketing, their bold, yet minimalistic designs, and their price to performance ratio. I confess I wasn’t in love with their Magni, Modi, or Asgard 2, though I blame my bias for the slightly warmer than neutral balance. I feel Schiit tends to lean on the snappier, technical, dry side in tonality, which will undoubtedly win over many, just not audited to my particular taste.

I’ve also owned the 1st gen Schiit Lyr, though I didn’t experiment with tubes, having only swapped from the stock tubes to the 6N1P replacement tubes Schiit sold for a brief period. I didn’t exactly love the Lyr, not impressing enough to want to delve further into the tube side of the amp world. I decided to stick with the simple, effective solid state offerings from other manufacturers.

In came the Schiit Vali. Tube hybrid, with non-replaceable tubes, at a very affordable $120 price point. This may sound weird to some of you, but I actually like it when gear is made to be used as is, without extra modifications or features. This is a large reason why I’ve stuck with solid state amps for so long. Most have no extra features to detract from simple enjoyment. It works as intended right out of the box.

I won’t find myself wondering what tubes I need to spend tons of money on just to get the amp to sound better than out of the box. What you hear is what you get, and I’m perfectly fine with that. 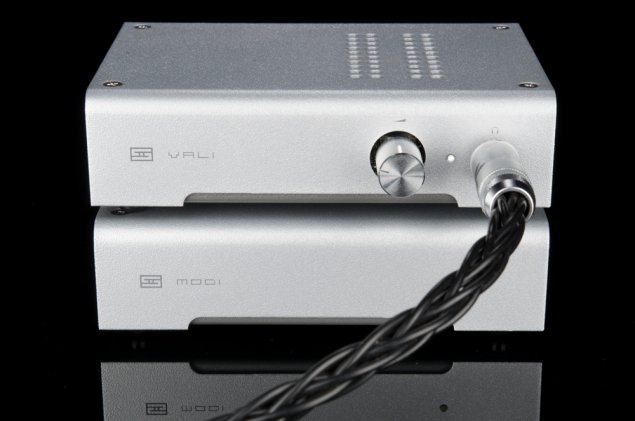 Rating: Fantastic If there is one thing that can be said of Schiit products, it’s that their designs are sturdy, functional, and striking. The Vali shares the same basic design as the Magni line, so much that you may not tell them apart unless you look at the ‘Vali’ etched on the front plate, or peek inside the top openings to see the tubes resting on the board.

Uncolored steel is used for the front/top plate, with dark gray body used on the body as a tasteful contrast.

The small volume knob is coated in shiny aluminum, and completes the premium look of the Vali, which contradicts the low price. On the rear of the Vali is the AC input, power switch, and RCA inputs. Sadly, the Vali does not have a gain switch, or any extra inputs/outputs. For the price, it’s to be expected. The Vali has a very small footprint, and should fit practically all audio setups with ease.

The Vali uses NOS JAN (military spec) Raytheon 6088 tubes and are rated to last between 10,000-20,000 hours, which is many, many years of use, and basically rivals the durability of a solid state alternative.

The Vali is all business, no fluff. You get the Vali, and the AC adapter. You’ll have to provide your own RCA cables, which shouldn’t cause issue for veteran audiophiles. Newbies can easily order some cheap, yet good quality cables from Amazon or Monoprice. Schiit also sells their own PYST cables, if you feel like keeping everything in the family.

Shamelessly taken from Schiit’s Vali page: I personally do not obsesses over technicalities, and only look at certain specs like maximum power at various impedances, and output impedance.

The Vali certainly seems to have enough juice for most headphones even at 600ohm (considerably more power at 600ohms than something like the Fiio E9). Insensitive planar magnetics like the HE-6 may be a bad match, however, so you may want to look at pure solid state amps for planars if you want to stick to this price range.

The Vali’s 6.5ohm output impedance may be technically problematic for headphones under 52ohm (if you follow the 1/8 rule), in that it may affect their tonal balance and sheer technicalities, though my experience with the Vali and sensitive headphones like the Philips Fidelio X2 (35ohms) has been a generally positive affair. 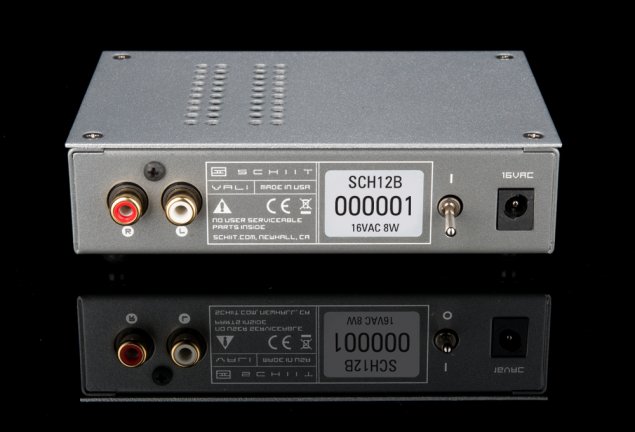 Rating: Excellent As someone very much used to solid state amps, and their general sameness, the Schiit Vali took me aback.

Let’s get the bad news out of the way first…

Schiit has explicitly mentioned their Vali’s shortcomings, so these cons shouldn’t come as a surprise. These are the cons I’ve experienced myself. I won’t get into things like THD. I’ll leave that for the objectivists.

The Vali is certainly an amp that likes to be warmed up before use. The good thing is that the faint ringing becomes generally inaudible while music is playing, and like the Vali’s background noise, becomes a non-issue overall. Believe me, the microphonics may sound like a deal breaker, but it would be a MASSIVE mistake to write the Vali off simply due to this minor niggle.

Those are the two cons I can see people having any major issue with the Vali.

What other non-audible issues may people have with the Vali? For one, the Vali lacks a gain switch, so for sensitive headphones, you’ll have to be a bit careful with volume adjustment, also making certain that the volume start off on the very low side before playing any audio. Thankfully, the Vali has a startup delay, so leaving headphones plugged in is perfectly safe.

So what makes the Vali worthwhile, considering it’s well known shortcomings? The price is quite low, lacking in versatility compared to amps like the FiiO E9 (which has more inputs and outputs, and a gain switch and falls in the same price range). Surely, your money is better spent elsewhere? Well, no. The Vali is a piece of gear that simply has to be experienced.

I have owned various amps ranging from $100 all the way up to over $600. So please take this seriously: The Schiit Vali is my favorite amp to date. The Magni, Asgard 2, hell, even the Lyr didn’t stack up to the Vali, personally. How Schiit can manage to sell such a wonderful sounding amp for cheaper than amps that are far inferior is beyond me. Sure, technically, their other offerings are technically sound, but none have offered the same enjoyment out of my audio in the way the Vali has.

I won’t feed you hyperbole, saying it expands the soundstage, making bass tighter, making treble cleaner, or any such things associated with a glowing impression. What I will say is that the Vali has managed to make my headphones sound less two dimensional and flat compared to my Fiio E17 that I have on hand to compare (and have enjoyed for years).

The bass on the X2 sounds more rotund off the Vali. Not in the way that it sounds more emphasized, but more rounded and fleshed out. It extends a hint deeper with more body.

The mids/vocals have become a hint more fluid and organic on my Fidelio X2 (which comes with a fairly neutral characteristic in it’s tonality.) It’s not a staggering difference, but a welcome one, as I do have a preference for vocal warmth and fluidity.

The Vali has again given the X2 a more fluid, and organic tone to it’s sound, extending to it’s treble presentation. The treble is still quite lively on the X2, but there is an extra hint of smoothness, and less aggressiveness when paired with the Vali.

The soundstage doesn’t sound BIGGER mainly in terms of width. What is does sound like is…DEEPER. It projects sound in more layers than what I have grown accustomed to. It is essentially the same aural space with an added layer in dimensionality.

Whereas I’m accustomed to a purely digital, clean sound, the Vali gives off a more lifelike, gritty, realistic sound. The X2 is a fairly clean, neutral headphone, which has not changed with the inclusion of the Vali. The Vali seemingly injects an extra layer of euphony as if I went from a CD to an expertly recorded Vinyl. The digital restraints have been taken over by an analog-like presence.

Don’t get me wrong. The Vali isn’t something drastic like an EQ with a bass/treble boost. The Vali is more like a very thin blanket of realism draped over a headphone’s sound. It is simply something I’ve yet to hear even from warm, monstrous amps like the Audio-GD SA-31.

When you find yourself wishing you could listen to all the older headphones you no longer have with the Vali, you know you’ve listened to something special. I’ve always been of the mindset that a good solid state amp shouldn’t ever add or take away from a headphone’s sound; only highlight what makes them good. I still believe this. However, the Vali’s subtle infusion of euphony has opened my eyes to a new world, in that the gear can merely supplement and aid a headphone into sounding better, especially when it isn’t altering their sound signature, but making it more lifelike.

While the Schiit Vali may not be perfect in technical execution, all that objective talk goes right out of the window once you’ve heard the musicality, euphony, and sweetness out of the Vali. $120 for the Vali is frankly, quite incredible. The Vali isn’t just a great, little amp. It’s a fantastic amp, one that should be experienced by audiophiles at least once in their lifetime. I wasn’t a fan of tubes due to the constant search for the perfect pair for your gear. Schiit has given us a tube amp with a proficient set of tubes that sounds fantastic from day 1.

I hope in the future, Schiit releases a Vali 2 with a gain switch, 4ohm output impedance at the most (for 32ohm headphone versatility), more power at low impedance (for planar magnetic use), and perhaps a little less background noise/microphonics. Even for double the current Vali’s price, that would be yet another game changer by Schiit.

For now, I’m quite content with the Vali, enough to recommend it to absolutely everyone willing to listen.

Under the name Mad Lust Envy, known for the surprisingly popular headphone gaming guide on Head-fi's Video Game Discussion sub-forum. Avid anime and gamer geek with a penchant for headphone audiophilia, though admittedly more for general media use, less so for music. Plenty of music listening when reviewing, however. While the headphone hobby started in 2010, it was full steam ahead from the start, never looking back.