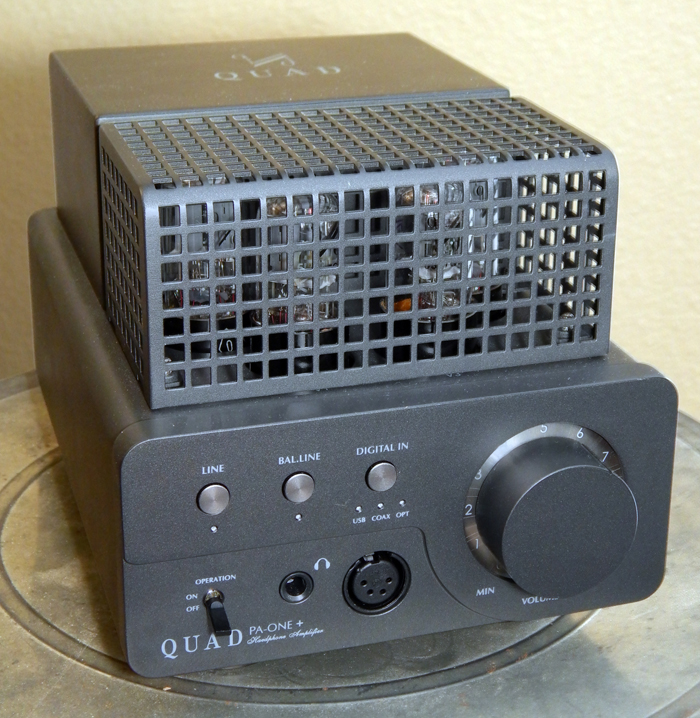 When I reviewed the Quad ERA-1 Planar Magnetic Headphone I knew that Quad had made the occasional tube amp over the years, but considered them to be a speaker manufacturer, what I didn’t know (until I had researched for the ERA-1 review) was that they had started as an amplifier company, such are the pitfalls of redefining loudspeaker technology and producing one of the best sounding and highest respected speakers of all time, the ESL (Electrostatic Loudspeaker). As fate would have it Quad is, in fact, an audiophile amplifier company who also designs and builds speakers, hence when I discovered the Quad PA-ONE at RMAF, I agreed to hold onto the ERA-1 until a review sample could be sent. Then I was informed that there would be a slight delay as a whole new amplifier was being released the Quad PA-ONE+ Triode Tube DAC/Headphone Amplifier.

The plus appears to be the addition of balanced outputs and a much improved DAC, as well as replacing the rectifier tube with a solid state circuit which tends to improve reliability without any adverse effect to sound quality as it is outside of the signal path. In the British vernacular the PA-ONE+ is powered by a pair of 6SL7 valves along with a pair of 6SN7 valves in a triode configuration employing cathode feedback as opposed to a conventional negative feedback loop. The DAC has been upgraded to an ESS Sabre 9018 K2M DAC chip able to accept up to PCM 384 kHz and DSD256.

Other than when you look into the tube cage there are four rather than five tubes and the four pin balanced connector on the front, the Quad PA-ONE+ looks pretty much the same as the Quad PA-ONE, which is classic high-end tube amp. That is to say, an elegant rolled edge metal chassis set on four large isolation feet with a rolled metal casing over the transformers and a metal cage over the tubes. On the ½ inch thick faceplate you will find a large milled aluminum volume knob, three metal input select buttons (line input single ended, line input balanced, digital input USB/Coax/Optical), a metal toggle switch (standby on/off), a ¼” single ended headphone output, and a four pin balanced headphone output. On the back you have a pair of balanced analog inputs, a USB digital input, a TOSLINK digital input, a Coax digital input, a toggle switch for impedance (low/high), a pair of RCA single-ended analog inputs, a pair of RCA single ended pre-amp outputs, a main power rocker switch and the power cord socket.

Included among the accessories was a USB cable that was used for this review, though their literature only lists a remote control, batteries, power cord, and user manual, so this may be an aberration.

The Quad PA-ONE+ and ERA-1 have excellent synergy providing realistic timbre and tonal balance, a large three-dimensional soundstage, wide dynamic range, and great musicality. Listening to Billy Joel’s “The Ballad Of Billy The Kid” (Piano Man – DSD) the piano was rich and energetic and the orchestra was full expansive with good instrument placement and imaging. The drums were tight and impactful and the bass showed exemplary resolution. There was real depth to the soundstage placing the instruments at a distance with Billy up front and his vocals warm and musical.

Moving on to “The Firebird Suite” (Robert Shaw & the Atlanta Symphony Orchestra – Stravinsky: The Firebird; Borodin: Music from Prince Igor – 16/44.1 kHz) there was great air around the soloists, and the tonality was pitch perfect making it easy to pick out the similar sounding woodwinds and brass. The tympanis were fast and articulate and the detail during the crescendos exhibited great resolution from the DAC playing standard resolution tracks.

Bing Crosby’s rich baritone was given real meat as he sang “Too-Ra-Loo-Ra-Loo-Ral” (Swingin’ on a Star – 16/44.1 kHz) and the vintage recording was reproduced with a complete fullness eschewing the tininess that solid state systems tend to portray. Again the vocals were warm and intimate while the orchestra was large in the background.

For a look into live recordings, I picked Jimi Hendrix’s Woodstock performance of “Izabella”(16/44.1 kHz). The band was on an even plane about 10 feet from the listener with the drums on the right and the bass on the left while Jimi took center stage with his vocals a touch forward of guitar amps. People talk about better than live and you get a little of that with the Quads, presenting a warm dynamic soundstage without edge.

The PA-ONE+ easily handled the ramp up to the higher impedance LCD 3s reproducing a stage-side table at a dinner theater atmosphere for Dean Martin singing “Everybody Loves Somebody” (Everybody Loves Somebody – 24/96 kHz), with a natural laid back depiction of the upright bass, drums, and piano accompanied by an enveloping string section and a healthy choral group.

To test the balanced output I selected the MrSpeaker ETHER2s and a 24/96 kHz vinyl rip of Nicky Hopkins’ “No Time” from his epic album No More Changes. The piano had an authentic tonality set in a large hall, while the bass guitar was deep and palpable, the lead guitar sweet and melodic, as the steel guitar and organ provided a haunting ethereal background.

Listening to “Killer Klowns From Outer Space” by the Dickies (Killer Klowns From Outer Space – 16/44.1 kHz) on the 1MORE Triple Driver Over-Ear Dynamic Headphones the dynamic drivers did what dynamic drivers do, create an exciting and dynamic presentation, and the PA-ONE+ mellowed the sometimes strident high frequencies produced by the budget headphone.

The Quad PA-ONE+ Triode Tube DAC/Headphone Amplifier proved true to its heritage as the product of one of the first audiophile tube amplifier companies offering a sweet musical midrange and high end with beefy but tight lows and a huge soundstage regardless of the headphone it was played through. The DAC handled standard resolution tracks as well as it did high-resolution PCM and DSD painting vistas on the aural canvas though much of this is due to the amplifier as I received similar results with external DACs.

There is a symbiotic harmony between the Quad PA-ONE+ and the Quad ERA-1 headphones making the PA-ONE+ the ideal, nay essential choice in amplifier for use with the ERA-1, bringing out all that the ERA-1 is capable of in detail, soundstage and musicality.

On its own, the PA-ONE+ is the quintessential audiophile tube amp lifting the veil between the listener and the music creating an immersive and pleasurable experience.