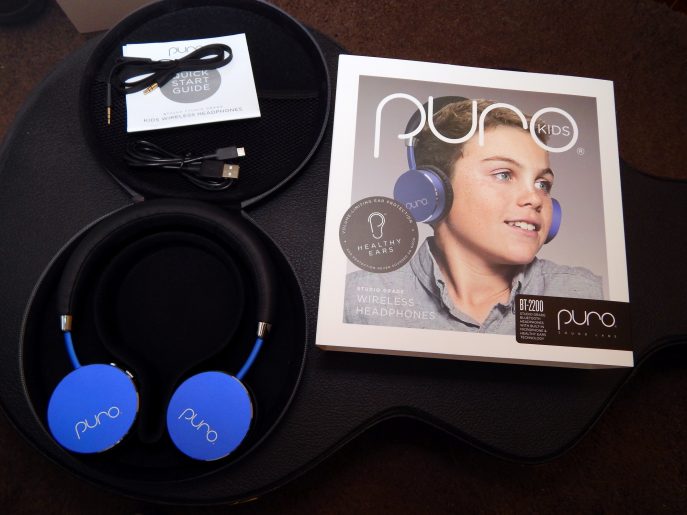 Puro is a unique headphone manufacture with an unusual focus, Hearing Health. For the story behind Puro, I defer to Puro themselves;

“Why do we care so much about Noise-induced hearing loss? It’s personal.

In 2014 our founder, Dave Russell, learned that his youngest daughter, Niki, had developed Noise-induced hearing loss. The doctors told them the culprit was on her head everyday on the way to school, her headphones.

For America’s youth, hearing loss is a growing epidemic. Today, one in five teens suffer from some form of hearing loss, a 31% increase since the mid-90s. The driving force of this growth is that 50% of teens and young adults age 12-35 are exposed to unsafe levels of sound from their personal music players. To put that in perspective, that amounts to roughly 1.1 billion teens and young adults worldwide.”

Puro has two basic goals, audio safety and sound quality. To achieve this they begin with passive noise cancelling or more correctly, noise isolation. Isolation is a key component to both sound quality and sound safety. I think any audiophile or indeed anyone who has worked in a studio will tell you that reduction of ambient noise is central to achieving good sonic performance. Noise floor is crucial, dynamic range is the relative ratio of noise floor to maximum signal and it doesn’t matter if the noise is from ambient environmental noise or from the recording or from the equipment, the more noise, the less dynamic range, which effects not only the emotional aspects of the music, but your ability to hear detail as well. As an example, this is why it is so difficult to enjoy dynamic music, especially acoustic or classical music, in the car, when the volume of the louder instruments has reached the point of being painful, the quieter instruments still fall below the threshold of road noise. On this first metric, Puro has been able to block out 82% of ambient noise with the design of their BT2200, which puts it in close proximity of active noise cancelling headphones.

Their next step is to limit volume to 85 dBA (maximum safe listening level as recommended by the Hearing Health Foundation, OSHA, World Health Organization, American Speech Pathology Association, etc.) which further enhances the need for isolation. Since the BT2200s are Bluetooth, this is fairly easy to do with the internal amplifier, but Puro goes one step further by providing a cable with a built in limiter for use with none Bluetooth sources.

The Puro BT2200 came in a nice magnetically clasped box with a full color outer sleeve, a fairly elegant presentation for a moderately priced product. Inside was a saucer shaped zippered hard shell carrying case which contained the Headphones, a USB charging cable, the afore mentioned limiter cable and the documentation.

Since the BT2200 is designed for children, I felt it best to enlist the aid of one in my evaluations of the product, as even Puro is quick to point out; they are only effective in protecting the child’s hearing if the child enjoys using them. So I took the Puros and went to visit my goddaughter who is thirteen, and though not what you would call an audiophile, she is definitely a music lover, and obviously a member of the target audience for the BT2200. She was ecstatic; it was love at first sight, even before she put them on, or listened to them. She loved the look of the headphones. She loved the carrying case. She liked how they fit, and she enjoyed the sound, so on that front, it was a definitive win.

My first test was for battery life, and thanks to the Astell & Kern KANN (Napster kept dropping on my phone) I was able establish Bluetooth playtime as well in excess of the 18 hours quoted by Puro. The sound while listening to Napster from my phone was clear with a strong presence in the bass as I took in “Burn” as performed by Andra Day, with decent dynamic range.

I had a similar experience with “Can’t Explain” (The Who – 24/48kHz) though the bottom end was not as defined as I would like, it was excellent performance for Bluetooth from a phone.

Switching to the KANN (connecting via Bluetooth) with a 16/44.1kHz recording of the same song things tightened up a little, the guitar crisp, the tambourine had a little sizzle but not offensively so, all and all, reflective of the recording.

I cued up “Cut My Hair” (The Who – QuadropheniaI- 16/44.1kHz), John Entwhistle’s bass came in with great tone and authority, the piano neutral and in the background, while Daltrey’s vocals were presented with a liquid silkiness. The sound stage was immediate and the drums maintained a strong attack.

Yoko Kanno and the Seatbelts’ “Want It All Back” (Cowboy Bebop – 16/44.1kHz) retained all the excitement of a small club performance. Again the piano was very neutral and Yamahaesk, the bass strong and articulate, and vocals honeyed, with a palpable snap to the percussion.

For a classical track I picked Arthur Fiedler and the Boston Pops rendition of “William Tell Overture” (Rossini – HI-FI FIEDLER – 16/44.1kHz), the dynamics were fantastic, the flutes clear with a woody tone to them, the oboe gave great counterpoint with its slight burr, and the horns dramatic without any brassiness. Cellos and violins were easily separated from the splash of the cymbals and the concussion of the tympanis as they chased each other to the crescendo.

I switched over to the Questyle CMA400i prototype to test the BT2200 with the wire limiter. Rather than compressing the dynamic range the limiter simply cuts the sound off, forcing the listener to lower the volume thus maintaining sound quality while protecting ones hearing.

The overall voicing was similar to the sound of the headphones in Bluetooth, with the obvious boost to dynamic range and resolution to be expected when comparing a wired solution to Bluetooth, as was well demonstrated by Stan Ridgway’s “Camouflage” (The Big Heat – 16/44.1kHz), reproducing all that mid eighties slap and pop with ease.

The Puro BT2200 Studio Grade Children’s Bluetooth Headphone is quite an accomplishment that appears to achieve all of its goals. Not only do you have a company that cares about the health and well being of its consumer base, it also takes them seriously, so while others (and this includes parents) are only interested in the 85 dBA sound limit, Puro shows a real desire to make a product that appeals to young people aesthetically, but respects their ability to discern good sound quality. They also show an excellent understanding of their audience, making the most of what many would consider a fairly low volume level by enhancing bass performance and midrange clarity.

I can with clear conscience, heartily recommend the BT2200 to any parent of a budding music lover, in fact to anyone who has serious concerns about long term hearing loss.