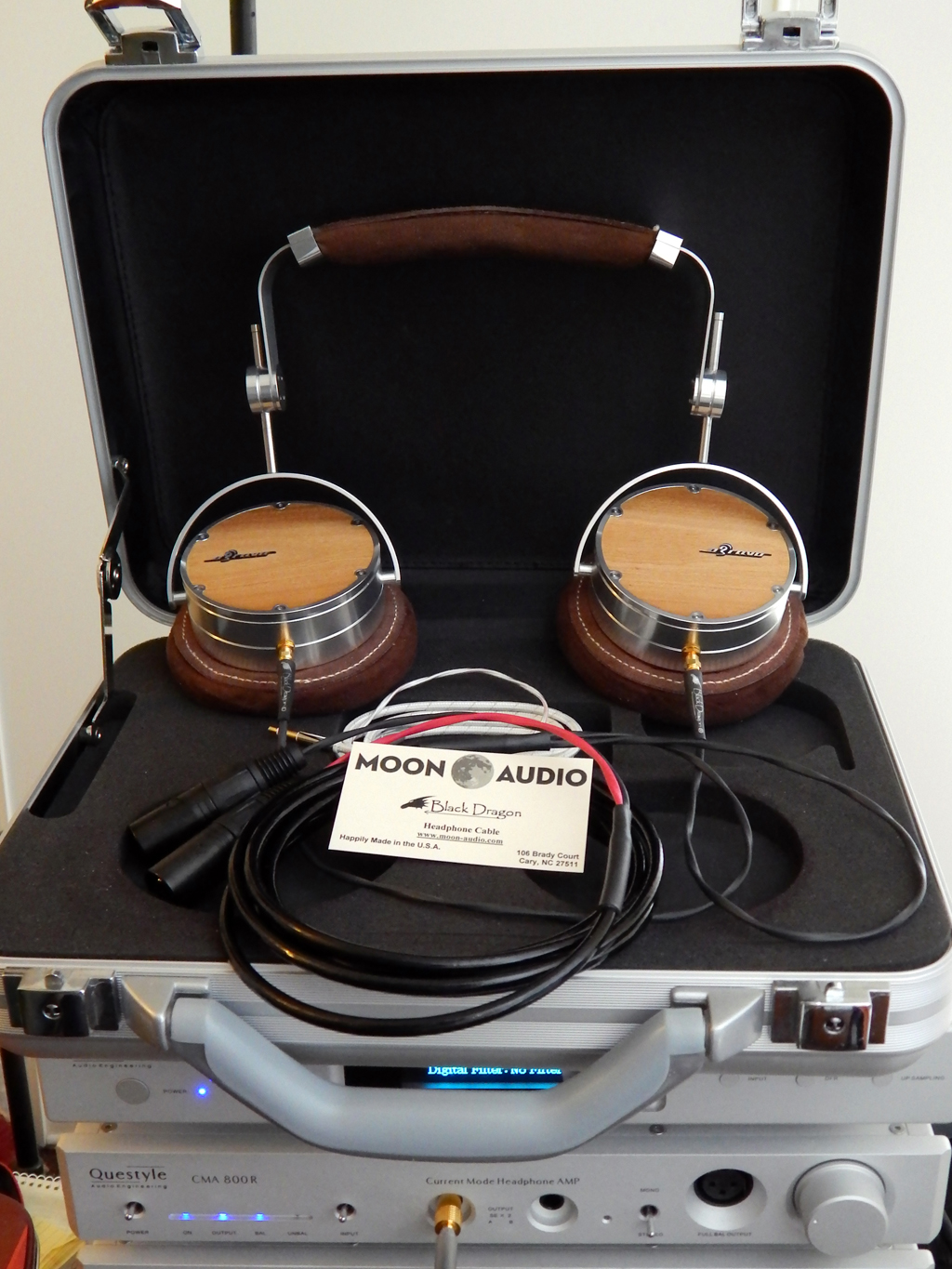 The oBravo HAMT-1s arrived in an elegant aluminum briefcase purposely designed for said purpose setting a new bar for presentation. They came with a 4′ cable terminated in a 3.5mm single ended connector with a ¼” adaptor. Moon Audio was kind enough to provide me with a 3 meter dual balanced version of their Black Dragon headphone cable so I could audition the HAMT-1 with the full Questyle CAS 192D / CMA800R dual mono stack.

The HAMT-1s are beautifully turned out in aluminum with wood end caps and Alcantara ear-pads, employing a horseshoe style head band. The build quality is exemplary and the use of WIMA capacitors in the crossover show a dedication to performance.

I began my sound checks with the factory cable and the “as is” port tuning (one port sealed and two open). My first impression was that they sounded remarkably like the ESS AMT-1D (the last rev of the speaker I had the opportunity to listen to), with a slight and steady upturn in the upper mids and high frequencies and a matching uptick in the low frequencies. The techie in me soon gave way to the temptation to experiment with the bass ports. To my tastes optimum performance was achieved by sealing all three ports creating a tighter more controlled bass and adding a little presence to the midrange, though I could imagine some might prefer to forego the covers entirely, such is the benefit of tunable designs.

Starting with Pink Martini’s haunting rendition of “Que Sera, Sera” (Sympathique 16/44.1 kHz) the layers of bells, cymbals, harps and piano were well served by the brighter characteristics of the Heil Air Motion Transformer, creating an immense and three dimensional soundstage with the listener placed at the center. The piano came over with a Yamaha character immediate and robust. When the full orchestra was engaged at the crescendos the horns were a bit brassy with soprano overtones as one would experience in a very live venue which is in keeping with the intents of the recording.

Moving onto “The Firebird Suite” (Eiji Que and the Minnesota Orchestra DSD), spatiality is the term that best describes the experience. While the depth of field had a headphones two dimensionality the placement of the individual instruments was precise and discrete giving a sense of incredible space. The bass and cello’s were rendered resonant and deep, the woodwinds were sweet and fluty and the brass had an almost woodwind quality. The percussion was fast and authoritative with an appropriate dose of subtle inflection.

Vocals are treated to a very personal intimate and clean sound as was demonstrated by Regina Spektor and “On the Radio” (Begin to Hope 16/44.1 kHz) with only a slight sibilance from the hi-hat.

To test the extremes on subsonic bass I put on “Lucky Man” by Emerson, Lake & Palmer (Brain Salad Surgery 24/96 kHz) and was surprised to be able to so easily detect the subtle differences between the multiple acoustic guitar tracks and follow the vocals as they moved around the room, nor was I disappointed by the hearty bass extension.

A couple words about the Black Dragon headphone cable. I used it for most of my serious listening test, not that the oBravos needed the added power of the dual mono system, but I wanted to hear what the HAMT-1s were capable of. The Black Dragons were a major step up sonically, able to tame the sibilance of the ribbon driver sound while increasing the detail and presence at the same time maintaining the rich bass and dynamics.

At this point, since the factory cable was designed for 3.5mm connections, I switched over to the Questyle Audio QP1 DAP. Running on the “Low” gain setting I selected “Wish You Were Here” (Pink Floyd Wish You Were Here DSD). There was more than enough volume meaning the HAMT-1 should be compatible with most DAPs without resorting to an external amplifier. The bass was a little bloomier than on the desktop system but totally within acceptability. As this could be an aspect of the recording I changed to Jaco Pastorius and “Portrait of Tracy” (Jaco Pastorius DSD) which was indeed tighter and well articulated.

For a taste of live music I selected Arlo Guthrie’s Woodstock performance of “Coming into Los Angeles”. The oBravo’s on stage presentation had an almost studio feel to it due to clarity, though it had the same huge soundstage as noted with other recordings.

The horns of Miles Davis’ “So What” (Kind of Blue 16/44.1 kHz) were robust and close with a luxuriance of the small club, the rear wall reflections distinctly reproduced. The upright bass had a power and weight that placed you at a table by the stage.

As a final test I brought up Napster on the phone and listened to “Amerika” (Young the Giant Home of the Strange) proving that the HAMT-1s were up to even the most humble of sources. There was an opulence to the sound not really expected, as I reinforced by continuing on to Mirah’s “Nobody Has to Stay” (C’mon Miracle).

Fans of the WATT Puppy sound will find a kindred spirit in the oBravo HAMT-1 and tweakers will love the ability to modify the sound to their own tastes. While I believe that the Black Dragon headphone cable is a must have for any serious HAMT-1 owner, the stock cable is great for use with portable devices. Lovers of the analytical properties of ribbon drivers will find the oBravos work well with any style of music and though I expected them to be unforgiving of low resolution sources this proved to not be the case. In fact their warm bottom end enhanced the performance of streaming music.

Elegant and well made the oBravo HAMT-1 headphone is a piece that any audiophile would be proud to own.