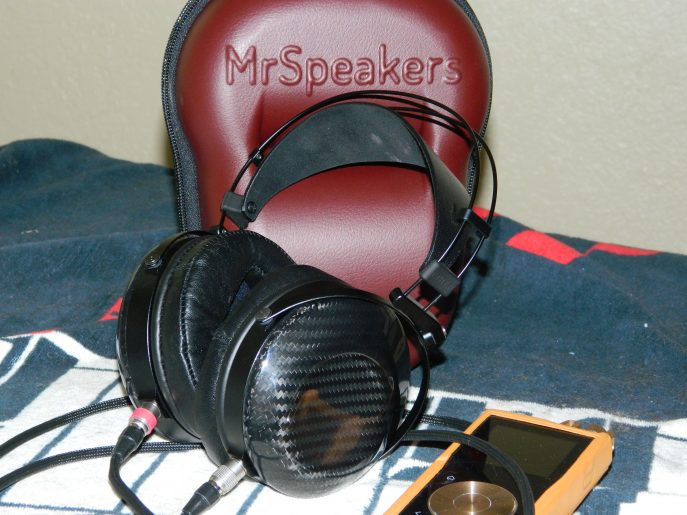 Innovation is probably the best term to describe Dan Clark and his company MrSpeakers. They developed their reputation by modifying Fostex T50RP, first with the “Mad Dog” then the “Alpha Dog” and eventually the “Alpha Prime” headphones. Not satisfied with simply upgrading OEM headphones, Dan went on to design and build his own headphone from the ground up bringing the “ETHER” headphone into being, which quickly garnered a huge following. Rather than rest on his laurels, he experimented with a closed back version of the ETHER headphone, the ETHER “C” which is offered as an alternative to the open back ETHER headphone rather than as an upgrade. Seeking to produce a “Summit-Fi” headphone, Dan began work on the ETHER “Electrostatic” (still in the prototype stages). It was while laboring on the Electrostatic design that Dan became aware of performance differences between the Orthodyanmic and the Electrostatic models that couldn’t be accounted for due simply to diaphragm mass which in turn led to the “Flow” versions of the ETHER and ETHER C headphones.

It’s about speed. Essentially, the faster you can start and stop your diaphragm, the more accurately you can track the audio signal. Three driver styles dominate modern headphone design (the first headphones used balanced armature drivers, but they are predominantly only used in IEMs nowadays). The majority of headphones use dynamic (moving coil) drivers. Dynamic drivers have three moving components, the diaphragm, the coil, and the former (this is what the coil is attached to which is in turn attached to the diaphragm) which creates a bit of mass (the higher the mass, the greater the inertia – the tendency of an object to remain stationary or in motion – the more energy required to start and stop the diaphragm hence the slower the acceleration and deceleration). Since the former has a relatively small contact space on the diaphragm, diaphragm distortion becomes an issue (this is why most loudspeaker drivers are cone shaped) requiring extremely rigid materials for diaphragm construction which again increases the mass. An electrostatic driver has a single moving part, the diaphragm. Also, since equal energy is applied to the entire surface of the diaphragm, diaphragm distortion is less of an issue and lighter materials can be used. The drawbacks of electrostatic are a bias current is required, meaning special amplifiers and limited excursion, meaning less dynamic range, though this is somewhat alleviated by larger diaphragms. The third alternative is planar magnetic (Orthodynamic), in which the voice coil is directly attached to the diaphragm thus greatly reducing the mass over a dynamic design, and like electrostatics the energy is evenly applied to the entire diaphragm. Planar magnetics are MrSpeakers stock and trade.

So what is the “Flow”? Dan found that the shape of the magnet structure used in the ETHER and ETHER C headphones was interrupting the airflow causing distortion so he added little venturis to the magnet structure to improve the airflow. Let me quote Dan on this: “We are dealing with waves, where atoms move back and forth in response to pressure changes.  When the wave passes a right angle on a magnet, it experiences diffraction, which changes the direction of the wave from parallel to the driver to a quarter-spherical wave coming off the magnet edge, while the wave coming directly past the magnet remains parallel.  This is an increase in entropy and the result is masking of fine details and increase in distortions.  There are other effects as well, but the key point is we’re trying to acoustically replace the hard edges of the magnet with smooth passages that reduce these negative effects.”

Of course, the Flow modification changed the sonic characteristics of the driver so it was necessary to change the tuning filters to re-voice the Flow editions of the ETHER and ETHER C headphones to maintain the sound signature that they are going for.

Since the pair I received for review were pre-production I did not expect to get them in retail packaging, but they did come in the attractive and utile MrSpeakers hard shell travel case. In appearance they look pretty much the same as the standard ETHER C headphones, though I understand that the production models will come with a different carbon fiber pattern. They also came equipped with MrSpeakers signature DUM (Distinctly Un-Magical) cables. As if to emphasize how new these headphones were, a replacement set of production filters arrived the day after the headphones. (Note: all listening tests were done with the production filters in place.)

Most personal audio enthusiasts equate speed with brightness. Not so with the ETHER C Flow, in fact my first impression was that they were a bit dark, though this passed rather quickly with serious listening (it is possible that the production filters needed burning in, though I can’t think why). Much to the chagrin of audio purists like myself, there are two rules of thought when it comes to personal audio. One is that the playback system is part of the music creation process and therefore is colored to create a pleasant or exciting experience dependent on the tastes of the designer. In a world where the majority of the music is electronic or amplified this is a valid response, especially when one considers that often the engineer is deemed to be more important to the creative process than the musicians or song writers. MrSpeakers falls into the other camp, producing a neutral and more natural tonal balance.

When people talk about hearing something new in their music due to a given product, it is often because that product amplifies a given frequency or horror of horrors the product introduces a distortion that the listener mistakes for something new (I recently heard a DAC that sounded like it introduced delay – reverb – to make the soundstage seem larger), this does not appear to be the case with the ETHER C Flow. I was able to hear percussive low frequency notes that other slower headphones simply slur together.

As is my habit, I began with Robert Shaw’s performance of Stravinsky’s “The Firebird Suite” to judge tonal balance and imaging. The ETHER C Flow headphones were the first to pass my “chill” test. There is a transitional passage near the beginning that can give me chills down my spine if played on a high enough resolution system. More surprising, during the crescendo passages, I discovered a low timpani roll that I had never noticed before. Switching to the Reference Recordings Eiji Oue performance of the same piece (DSD), I was impressed by the solid placement of the instruments. The sound stage was airy and large, box seats in a good sized concert hall. The deep reverberation of the plucked cello string supremely stirring as were the crashes of the timpani.

Liz Story’s “Wedding Rain” offered up a piano that was rich and resonant, a Steinway concert grand in a large auditorium. For vocals, I first turned to Louis Armstrong for two minutes and nineteen seconds of heaven from the single version of “What a Wonderful World” (24/192). Once again, the instruments were treated to a full soundstage, and Satchmo came to life. I followed this up with “The Crystal Ship” (DSD) by the Doors. Jim Morrison’s baritone magic was rendered complete with emotion.

I have a list of about 60 songs that I use for product evaluation. These are songs that I know intimately, some of which I was present for the recording , giving me a proper reference to judge the characteristics of the item in question. Listening to the ETHER C Flow forced me to dredge through my music database (6 TB worth) looking for old favorites that I haven’t listened to in a while just to see what I’ve been missing.

“Anarchy in the UK” (No Future UK, The Sex Pistols, 24/96) was realized in all its raw brutality, showing that a quality headphone can enhance Punk as well as “long hair” music. And “Take a Pebble” from Emerson, Lake & Palmer showed the amazing dynamic range and low bass response of the ETHER C Flow.

To test DAP compatibility I ran the ETHER C Flows on my Questyle QP1R for a day. I was able to get excellent volumes at the low gain setting though to reach painful levels high gain was necessary. Though not quite as resolute as the desktop rig, the sound was superlative. As a final test, I ran them on my cell phone using Napster unRadio (formerly Rhapsody). Though I had to turn it almost all the way up, they performed beautifully with Regina Spektor’s “Us”.

What’s it all mean:

In the audiophile world of “snake oil” vs. “voodoo” there is the great question of: Is it better or just different? Since the Flow mod improves the actual physics of the headphone, it falls clearly in the better column.

Taken as simply a new headphone without respect to previous versions (as it should be), the ETHER C Flow is a phenomenal performing effort and has clearly raised the bar for planar magnetic headphones. It has amazing speed and accuracy, excellent tonal balance and dynamic range, as well as, controlled and deep bass extension. It performs with all forms of music with an eye towards the audio purist, and though it hungers for high resolution meat, it will bring out the best in the most humble of sources. Which means that, although you will wish that all of your files were either DSD or 24/192, you will get full enjoyment out of whatever you have.

While I still eagerly await the release of the ETHER Electrostatics, the ETHER C Flow has raised an existing model at a reasonable price from a headphone I really liked to one I truly Love.