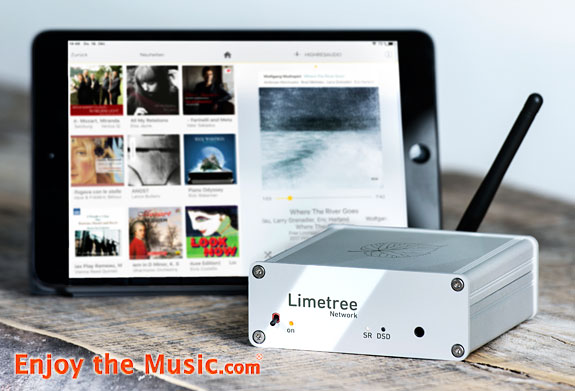 Do good things really come in small packages and at ridiculously low price points? I have always thought diminutive audio products always had too many compromises in their design to be used in anything but a portable playback system. I have also found that when a product is designed to a low price point, the sound usually suffers. When Enjoy the Music.com was offered the opportunity to review the Limetree Digital Network player from German audio manufacturer, Lindemann Audiotechnik GmbH I jumped at the opportunity to see if my prejudices held true.

In business since 1993, Lindemann has been a leader in digital sound reproduction. Founded by Norbert Lindemann, the company became one of the first manufacturers worldwide to bring a CD player with upsampling technology to market with the introduction of the CD1. This remarkable player and its refined sibling, the CD1 SE became the company’s top selling product since the founding of the company until the introduction of the Musicbook DSD in 2016. With the cooperation of Sony, Lindemann introduced the first German produced SACD Player in 2001. The D680 soon became recognized as one of the finest digital sources due to the analog nature of its CD, HDCD and SACD reproduction.

In conjunction with their 25th Anniversary, Lindemann launched the new Limetree series which promises first-class performance at a more affordable price point. Included in the new line are a phono preamplifier, a headphone amplifier, a USB-DAC, a streaming bridge and a network player, which is the subject of this review.

Getting Small
I knew Lindemann Audio’s Limetree Network player / headphone amplifier was small before it arrived, yet was not prepared for just how small it is. The Network is a 4.2″ x 1.6″ x 4.2″ aluminum box weighing in at a whopping .66 ounces. The front panel is rather plain with an on/off toggle switch that also allows the conversion of the data stream into 1-bit DSD. There are two LEDs that indicate the sampling rate and that the digital stream is being converted into DSD. There is also a standard 3.5mm headphone jack. The back panel features a pair of analog outputs via standard RCA connectors, a USB 2.0 port to allow the use of external music storage devices, a port for the antenna to allow use of the Network’s WLAN capability (IEEE, 802.111a/b/g/n/ac, dual band), an 100Mbps Ethernet port is also provided to allow a hard wired network. In addition, the Limetree Network is also Bluetooth compatible with devices that utilize the A2DP protocol. Rounding out the back panel is the port for the connection of the “wall wart” that provides power to the Network.

The small chassis contains everything one would expect to see inside a high-definition DSD-capable network player. The Limetree Network  utilizes two AK4452 DACs operated in dual differential mode, one for each channel. The DACs are coupled to an AK4137 re-sampler. All digital files are post synchronized using the ultra-low-jitter MEMS Femto Clock. This technology, which was developed by Lindemann promises to effectively eliminate jitter resulting in the best possible sound reproduction.

One additional advantage of using the AK4137 chips is that it allows the Lindemann Limetree Network to re-sample PCM signals into DSD. This is said to allow for more transparency and natural reproduction. PCM signals are supported up to 24-bit resolution with sampling rates of 384 kHz and DSD signals up to the DSD256 format. The sampling rate being used by the unit is indicated by the color of the SR LED on the front panel.

Easy Setup
I am known for being somewhat challenged by most digital devices but the setup of the Limetree was the easiest I have ever experienced. From unpacking it to playing music took me less than 15 minutes and that included installing Lindemann’s proprietary app, which turns your Apple iPhone or iPad (yes, there is an Android version available) into a handy dandy remote control. The app is very intuitive and user friendly. From the home screen, you can access the music on your mobile device, music on any servers on your network, or any storage devices attached via the USB port. Don’t forget you can also link a device via Bluetooth. The app also provides options for you to connect with paid services such as Tidal or Spotify.

I honestly can say that I was not prepared for what I heard with the Limetree. I honestly was expecting a presentation that was nice and polite but not comparable to products costing many times more. What I got was a presentation that was full bodied and natural sounding rather than constricted and artificial sounding, which is what I expect from lower priced digital devices. Montezuma from Cusco’s 1994 album “Apurimac II” contains Central and South American sounds that have been reincarnated with a decidedly modern European flavor. The track starts out with the sound of a Peruvian Flute that is presented with a sense of air surrounding it.

The flute is then joined by a steady drumbeat that is complementary than overpowering. Additional layering occurs as the synthesizer joins in moving the flute and drums to the background as it takes over the melody. Inexpensive digital front ends have a tendency to merge all of this into a single line with no sense of depth or air. Lindemann Audio’s Limetree Network handled the complexities of this piece without any of the negatives I expected to see. Everything was presented in great detail within its proper place within the soundstage. The flutes retained the sound of air moving through a wooden pipe while the drums never lost their sharpness and natural decay.

Musical Pleasures
One album that has seen heavy rotation in my listening sessions is Chelsea Williams latest album “Boomerang”. In this album, Chelsea weaves the three genres (indie-folk, country and pop) that have defined her musical style from her early days playing at the Santa Monica Pier into an album that I consider a masterpiece and one that will help propel her to the next level. I have listened to this album on CD and on vinyl. Chelsea has had the opportunity to hear the recording on both formats played through my system and we both were of the opinion that the vinyl was better than the CD. It had a more natural sound and was more dynamic with lots more air around her voice. The soundstage was deeper and more focused than the CD. The effect was as if someone had cleaned the window giving the listener a better view of the musical event.

I did a comparison of Tidal’s streamed version of the album to the vinyl and CD versions. The vinyl version is still the best in my opinion but the streamed version through the Limetree Network was awfully close. I was treated to a version that had many of the attributes that make the vinyl version so special. Its presentation was so natural with tremendous depth and air. The reproduction of her voice was what surprised me the most. I have heard Chelsea sing many of the songs on the album live in my living room. The Network absolutely captured the beauty and magic that makes her voice so special.

Lindemann’s Limetree Network also excels when faced with a recording that is extremely complex such as that of a symphony. The 1954 Mercury recording of the Minneapolis Symphony’s performance of Tchaikovsky’s “1812 Overture”. This recording remains the benchmark performance of this stirring classic some sixty five years later. The Limetree handles the complexity of this recording with total aplomb. It never gets congested as the music swells to its climax. It is almost as if the network is saying bring on the cannons, bring on the bells, bring on the strings and everything else, I can handle it. And handle it does.

A majority of my listening was done with the Limetree configured to convert all signals to DSD. The reason for this choice was that the Limetree Network is very good in PCM mode but things got even better when in resampling mode. I also did some listening through the headphone jack and found that I still was treated to a very special listening experience.

Check out Enjoy the Music!

See many great reviews by Enjoy the Music.com at this link.
Specifications

Latest posts by Enjoy the Music (see all)