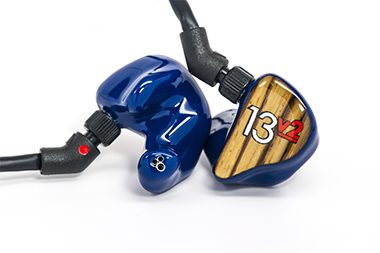 When Andy Regan the president of JH Audio asked me if I would like to review the JH13V2 I was excited. Having reviewed the Roxanne and the Layla for Jerry Harvey in the past made me enthusiastic at the prospect of reviewing the new JH13V2. The JH13 has a cult like following in personal audio community and one of the company’s most successful models. The JH13V2 promised to be even more special with some of the things that Jerry learned while designing the Roxanne and Layla. JH Audio had my impressions on file so it was rather quick getting the review samples from the company. Sue Regan asked me what design I would like and I told her whatever she decided would look best on me. She said I would love what she was going to send. When the postman arrived with the package I immediately opened the box and was blown away at the artwork and design of the JH13V2. The transparent blue shells combined with a wood grain on the exterior made for an appealing and striking design. The new JH13V2 is priced at $1175.

Jerry used the balanced armatures and circuit design from what he had developed for the Siren series. The Layla’s received our IEM product of the year award in 2015. Many users feel it is one the best IEM’s currently in production today. The JH13V2 have the same balanced drivers and circuits but are used in a 8 per side configuration. The addition of Moon Audio 4 pin conductor cable with the adjustable module was a welcomed addition and made adjusting the sound signature  quick and simple. The trickle down technology in the JH13V2 is a testament to the design and commitment by JH Audio to offer outstanding sound quality to the personal audio community at reasonable prices.

The differences the  JH13V2  offer over the prior JH13 is an enhanced soundstage and deeper bass extension. JH Audio has a reputation in both the consumer and pro markets for sound and tonality and outstanding build  quality in their production models. In addition to including the new balanced armatures, the design added a steel tube waveguide wand and the Moon Audio connectors with adjustable bass that goes down to -10db. This is serious bass and can deliver the lowest bass notes on recordings with texture and definition.

The JH13V2 still has an amazing -26DB of isolation to block outside noise and make them quiet enough to use on most airplane flights. Each unit is hand built in Orlando Florida and custom designed for the individual user. The custom designed EARS are well crafted and meticulously built for each purchaser. They come in a metal case with your name laser engraved on the case. It also includes a cleaning tool and a tiny screwdriver to help you adjust the bass module to your desired preferences. Complete specifications are listed below as well as on the company website located http://www.jhaudio.com/.

The JH13V2 arrived and sounded good right out of the box. The AK240 portable player I used is loaded with all types of lossless and high-resolution albums. The library of music is diverse with every genre available at my disposal.   Before any critical listening was done I let the JH13V2 run in at the suggested 50-hour mark to settle in and achieve a better sound.

Lucinda Williams “Down where the Spirit meets the Bone” is one of my favorite albums that was released in 2015. The sound from the track “Protection” has excellent sound staging and the musicians in her band are first rate. Seeing them perform live in concert last year gave me a sense of what they really sound like. Making adjustments on the Moon Audio connector and increasing the bass to the 12 O’clock position provided me with the sound I felt was closer to what I had heard when I seen them perform live. Noticeable immediately was the wide soundstage that I love in JH Audio designs. The sound was transparent and I could close my eyes and vision the band as when I had seen them do this track in concert last year. The air and separation of each musician in the stage was vivid and had ample spacing between the band and Lucinda. She was in her own defined space and the imaging was spectacular. It was as if you could feel her presence while listening to the performance. Lucinda Williams and her band all use JH Audio IEM’s while performing on stage.

The exceptional detail coming from the 6-driver design was exceptional and the soundstage was  more competitive than some other designs that cost more. The fact that Jerry was able to achieve a result that was similar to the much more expensive Layla for almost fifty percent less in price was amazing. In comparison to the flagship the JH13V2 gives up a little in soundstage width and transparency but was amazingly close in sound to the flagship Layla’s for less money. The new model was really showing the advantages of trickle down technology.

Listening to another track on the same album “East Side of Town “ Lucinda gets a little more personal talking about personal incidents in her life. She was very emotional and the lyrics came out with exceptional clarity.  The band is an incredible array of musicians and separation was again first rate.  Lucinda was in a focused space with pinpoint imaging and standing in front of the drummer within the soundstage. The clarity of her vocal and sound of the lyrics sounded clear and was flowing with exceptional musicality. The performance was amazing and a treat to listen to with the JH13V2

John Fogerty album of duets “I Wrote Songs for Everyone” will get you to rock and roll and craves to be played at loud levels. Listening to “Fortunate Son” with the Foo Fighters was thrilling. The JH13V2 had exceptional speed. It felt as if I was in a race car driving fast with Fogerty rocking my head and taking me for the ride. The sound once again was wide and out of my head with exceptional transparency. The sound coming from the monitors had the necessary speed to make this track come to life. The experience was breathtaking. Listening (maybe a little too loud) to the hard rocking beat made me want to listen to more of the same kind of music to feel the exciting sounds.

“Almost Saturday Night “with Keith Urban(uses JH Layla’s) doing the guitar and vocal work with Fogerty was more of the same. Both artist came to life and the fast rocking sound of the recording kept me focused with the music and let me enjoy the experience. Urban is a legendary guitarist and sharing this tune with John Fogerty made for a spectacular performance. The JH13V2 was able to render the performance flawlessly. Man this is what it is all about;transparency and dynamics that never omitted anything from the listening experience. The JH13V2 kept me engaged with the tune and I was consumed by the music.

Listening to “Lodi” with Shane and Tyler Fogerty doing the work with John was another step up in vocals. The sound and music coming from John Fogerty and the rest of the clan had that live feeling once again and the legendary artist was outside of my head and the music sounded so realistic that I forgot everything except the music. The intense sound coming from the JH13V2 had my complete attention.

“Collide” from “Born Free” has Kid Rock teamed up once again with Sheryl Crow and has Bob Seger playing piano. The duet has the Kid and Sheryl in unison and the sound was pristine. The well-recorded and well-produced track sounded exceptionally good and acoustic. Crowe’s voice was transparent and her delivery was exceptional. Kid Rock vocal had the deep heart felt lyrics coming alive and sounded realistic. The song was another personal reflection and both of these talented vocalist once again delivered a flawless perfomance.  The JH13V2 captured all the nuances and details in this magical tune.

Plane and Trains You Say

Flying West gives me 6 hours of listening time on a plane. Round trip gives me a good 12 hours to evaluate music and get some sleep. Many times planes are noisy and more often than not you see people using noise-cancelling headphones. In my experiences while using those type of headphones, I always seem to lose musicality and transparency and in many instances they never equal good custom in ear monitors for music delivery. On two separate West coast trip I spent 24 hours with the JH13V2. Flying on Airbus A321’s on both trips the IEM ‘s were quiet enough where I could listen to music uninterrupted and noise free. Boarding the red eye night flights with a fully charged battery I was able to listen to a genre of music non stop all the way home (maybe hearing in my dreams) and uninterrupted. The musicality and quiet sound drowned out all the noise from the plane.  Trains can also be noisy but the excellent isolation the JH13V2 should drown out any noise and provide an excellent listening experience.

You can tell from my listening impressions above the JH13V2 had my complete attention and had me engulfed with music. The sound coming from this exceptional product left me wanting for nothing. The adjustable bass can be tailored to your liking with the Moon Audio connector.  If  you want thumping bass you can adjust the Moon connector to the  full max position and you will get head banging bass with excellent extension and texture.The sound of the JH13V2 had me consumed with music for hours and many sleepless nights with its exceptional sound quality. If you want the Layla and cannot find it in your budget; the JH13V2 at almost 50 percent less in price will get you about 90 percent of the Layla performance. You give up a little in detail retrieval and extension but still keep all the bass and dynamic presentation of the Layla.The dollar to sound ratio is off the charts good.   Jerry Harvey and his team continue to explore the outer boundaries of what is possible in portable musical delivery. The JH13V2 gives me everything I could ever want in a portable in ear-monitor. It delivers exceptional performance and musicality and is highly recommended for any music lover who wants spectacular sound at a affordable price.

Frank started his journey in high-end audio in 1978 and was quickly hooked. Frank’s passion for music and great sound reproduction is stronger than ever. His main focus is with high-end headphones and portable related gear. He is a regular Head-Fi.org contributor and is a co-founder of Headphone.Guru.