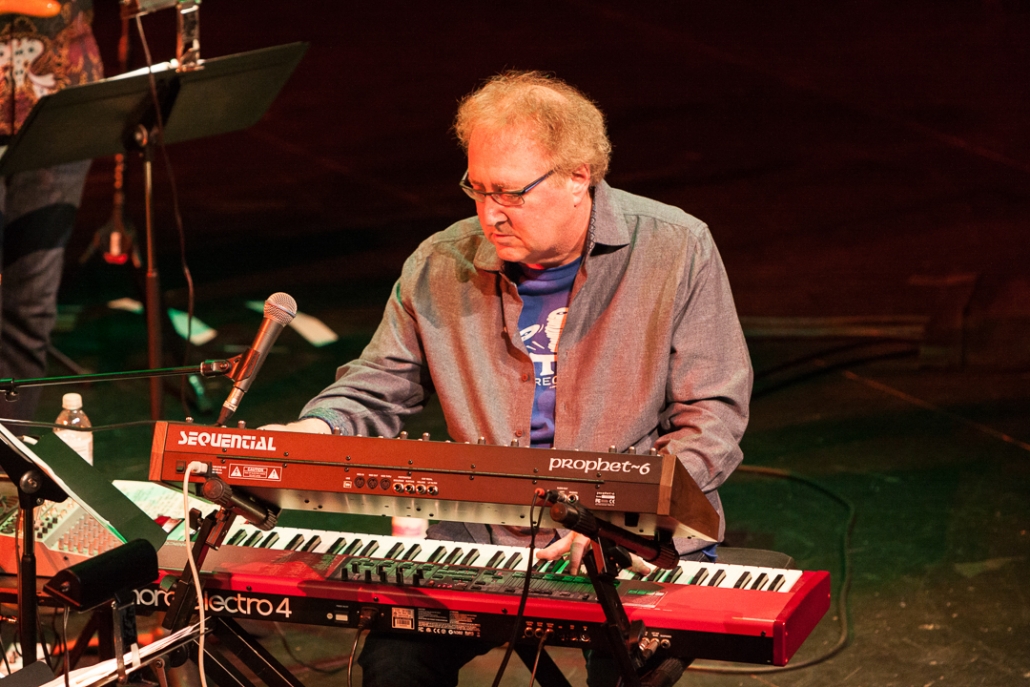 It is moments before the 1st show and I am nervous about one thing. This is a big club and I am nervous as to how many people will actually show up for the show. We had a good soundcheck and it sounded really good in the club. The staff at the club is very cool and accommodating. Lots of space on the stage and I do my pre show ritual of going to someplace where there are no people and I take some good breaths and meditate for a couple of minutes, then I gather the musicians and head downstairs. I am so pleased to see a very nice sized crowd who give us a nice hand as we walk on the stage. In all honesty it doesn’t take too long for the band to kick into gear. We open with a song I wrote with the late Michael Brecker, “Ferrari” a funky edgy song with very Miles Davis kind of changes. We receive great response from the audience as we move through the set. When we play “It’s About That Time” from In a Silent Way the audience really erupts into great applause. I mention this because all through the tour, this is the song that got the crowd really into the set. After a really great response we do an encore… “Jean Pierre” the famous song which was a signature Miles Davis Song. The next surprise is how many CDs I sold that night, I did very well. Everybody at the club is happy and many from the audience come over to me, genuinely excited about the music.

I created the Kind of New Project to take the concept that Miles created during his Bitches Brew period and take it to the next place. The musicians create the vibe of the song, with the melody front and center, and then we explore the mood of the song together through improvisation. It is obvious from the show tonight that the audience is getting it and I am right that people miss this kind of musical vibe. It’s about 11:30 PM and I need to check into the hotel and then we have a 6am lobby call to get a train to our next stop; Foggia in Southern Italy. Yes this is the glamorous life… Early morning lobby calls with a seven hour train ride before we get to Foggia.

The train station in Milan at 7 AM is buzzing and we get on the train and are in the modest First Class car. It’s so different than train travel in the US. Nice and comfortable and moves at a nice clip for not being high speed rail. As we head down the coast it starts to snow, Crazy! Then it stops snowing and it’s green all over. Then it starts to snow again and now we are on the Adriatic and the waves are crashing on the rocks. We are literally a few feet from the sea. After some naps and good conversation we arrive in Foggia and Nino our Promoter is waiting for us. He’s a cool guy and a real character. We end up walking to the hotel which was about 200 yards from the train. It’s a nice vibey classic old Italy hotel. Chill and nap time to get ready for soundcheck, dinner and the show.

After a snack and a very nice nap we head to the venue. It’s a restaurant, but turned into a music club. One thing that I notice, and I really like, is that the Europeans are very stylish and dress very cool when they go out. Nino has everything together with the backline and I’m programming the Nord Stage 3 to get the sounds I need. I also get interviewed by Italian TV and I really like the vibe of the people. We play a killer show and the audience just loves it, standing ovation and all, so we do an encore for them. After the show, the food just keeps on coming,
So delicious ! It’s cold outside for southern Italy and we have another early call to go to Bari, where we need to take two flights to get to Paris to do two nights at Duc Des Lombards, a very cool and legendary club. At 6 AM I get into the van and Nino hands me a package and a pen. I open the big envelope and there are like 20 CD covers of many of my CDs to sign and a copy of Amandla signed by Marcus and Kenny Garrett, so I sign them and fall asleep. We say goodbye to Nino and before we leave he tells me that he booked a major jazz act recently and the consensus was we were much better and more interesting. I felt really good.

We make it to Paris after a very benign trip which I am happy about despite the two flights. What’s so cool about Europe is that everything is so close together. One hour and you’re in another cool country and city. Again, a few hours off to nap, get some food and head to the club. At every venue I have a different Nord; I now have a Nord Electro 5 and so have to program that. Soundcheck is very good and the chef there makes us a really great meal…really great. As we are sound checking some excellent photographers are taking shots of us.

Though we heard that advanced ticket sales were light, Reggie is not fazed at all, he predicts we will have good houses for every show, and time will prove him right. As time progressed the venue filled up very nicely, with a great opening night crowd for both sets. The band was cooking and I got to play music from my new Kind Of New album, “Blue is Paris”, when I told the story of the song the crowd got very emotional and so did I. I was also so happy my good friend Karin Haslinger, who does so many great things for me from videos and my website and one sheets, she is so talented, came both nights. Such a cool lady, still young in her early 30s, she has the world in front of her.

The next day Theo and I do a radio interview at TSF jazz with Jean Charles Doukan, which goes really well. We have the whole day off and few blocks from the hotel is a little village inside the city, with shops and restaurants. I follow the Parisians and wind up at a very nice kind of high end deli. I bring back to my room some excellent food and the Creme Brûlée, wow, it is killing! I eat and nap and now for the second night at Duc Des Lombards, we have more nice crowds who seem to love the music and they are also buying CDs. The French are so cool and vibey to me. I’m waiting to interact with the stereotype Frenchman and that never happens.

Everything was going really well and travel was going smoothly. Sooner or later though, a test was coming. I didn’t realize that that test was about to happen in a big way. We were on our way to London to play a very important show at the legendary Ronnie Scott’s. It was hard to get in there, but there we were since I had made a very important move the night before. I broke out the Amex card and made sure we had a top notch car service to pick us up at Heathrow and bring us into London. No Uber vibe. I always remembered what Luther Vandross said to me many times. “When in doubt go rich and famous” Luther was always right and this called for no compromise to get us to Ronnie’s. Well for a 35 minute flight we were delayed 3 ½ hours due to them not being able to get a handicapped passenger off the plane, it took hours and I was getting very very nervous about missing the gig between the delay and the snow in London. Finally after some more crazy events we made it to London… a 35 minute flight, next time we take the train!!!

We have to now get our work permits and get to the club. Tense times but we make it out of the airport and the driver is waiting for us with a very nice Mercedes Van. At That point I call back the car company and book it for a 5:30 am pickup to get us to Gatwick. We walk into Ronnie Scott’s as the opening band was playing. Wow, a quick meal, then on the stage with the audience there, to do a sound check, and then back to the tiny dressing room to change into show clothes. Paul Pace, the main man at Ronnie’s, along with Sarah, another main person there, came back into the dressing room to wish us well. It was a very nice crowd and we played this music on a whole other level. The Audience was stunned as they hadn’t heard music like this, with such intensity and virtuosity in the spirit of Miles, for years. The place was really buzzing. I had no idea but Mike Hobart, music writer from the Financial Times of London, was there to review the show. Jay introduced me to him, nice guy, and I was so happy to see some artists I had been working with, like Beverley Beirne, were at the club. Many People came up to me and were just so excited about the music and I sold a lot of CDs. Jay was hanging out front and some crazy Russian woman, who had her husband with her, was telling me how cute Jay was.

London is a crazy town and the weather can change in about 5 minutes. It was an incredibly successful show, and I was riding a high for sure. Theo had something going on after the show so Gene and I decided to walk to the hotel a few blocks away, while Reggie and Jay share a cab. The weather changed every block from rain, to snow, to wind, to rain.

I was so pumped I had trouble falling asleep to get 4-5 hours of sleep and the next morning at 5:30 AM, we were on our way to Dresden Germany thru Berlin. As we were leaving the hotel people were coming in from a night of partying in London, I think London is the city that doesn’t sleep.

Next column, I will finish the story of the tour as well as sharing a great life moment for me that caught me totally off guard.