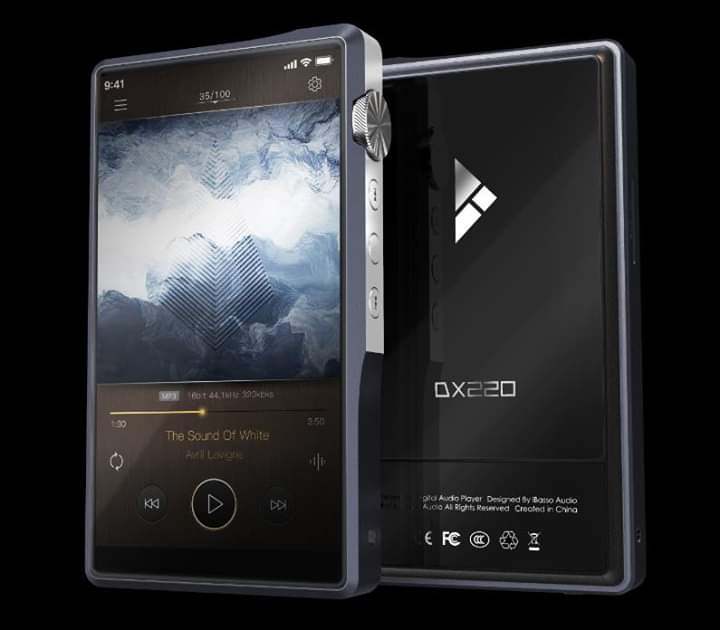 Measuring 4 7/8” x 2 5/8” x 7/8” the iBasso DX220 is comfortable to hold and well balanced in the hand. It comes equipped with the new revised AMP1 MkII which has a Line Out (output voltage 3vms), 3.5mm Single Ended Out (output voltage 3.1vms), and a 2.5” Balanced Out (output voltage 6.2vms) with a frequency response of 10Hz-45Hz making it ideal for sensitive IEM’s as well as full-size headphones. The amplifier modules are swappable and the DX220 is fully compatible with all iBasso AMP Modules that have been previously released and also offers Bluetooth 5.0.

One of the great things about this DAP is that it supports playback of DSD512 files. This is no small feat and it does so flawlessly, granted, these DSD512 files can run 20GB each but believe me, it’s worth it. The unit comes with 64GB internal memory, a single microSD slot capable of reading up to 2TB, and has 4GB of RAM.

The iBasso DX220 is secured within premium packaging and comes with a USB Type C Charging Cable, an OTG Coax Cable, a premium Burn-In Cable, and Warranty Card. As with all of the iBasso lineup, the box is nicely designed with an attractive box, ample foam, and the charging cable, burn in cable, warranty card and six screen protectors are beneath the unit.

The chassis is made of milled aluminum with gray/black highlights and the screen is updated over their previous flagship, the DX200, with Corning Gorilla Glass. The build quality is exemplary and the fit between seams is spot on. Sleek lines, a beveled screen, and semi-recessed volume knob make it comfortable to hold and easy to use. It comes with a premium leather case in mustard yellow, which, to me, is the only drawback here. Perhaps a black, brown, or red leather case would be more appealing to the eye.

Upon starting the unit up, we find the GUI has also been updated from the previous iBasso lineup with a custom interface based on Android O. It’s fast, responsive, and intuitive and it will be familiar to anyone using an Android based cell phone. The music player app iBasso uses is called Mango and there are actually two modes. One mode is Android based and the other is called Pure Mango mode. The Pure mode requires a restart and is based on Linux and therefore has no Android processes interfering with the playback at all. Many users of the previous iBasso lineup have preferred this to the standard Android Mango.

I have a test folder of 130 FLAC files that I use to test DAPs in general. I chose these specific songs because of the complexity and layering of the tracks, the instrumentation, and well…they’re all music I like… A lot. I’ll mention some of these tracks when I discuss the actual sound of the DX220 below.

First and foremost, upon putting your microSD card in, you get a prompt to “Scan Card”. I use a Sandisk Extreme 400GB card and it scanned fast, surprisingly fast. You then have the option of grabbing your files from the internal memory or the card. Choosing the card brings you to the standard folder view of your files. What is a nice upgrade from the other players I’ve had the pleasure of owning is that there is now a prominent search bar on top of the screen. This allows you to search title, author, etc…very nice. Navigating the OS on the DX220 is a pleasure and a definite improvement over the OS on the DX200, it just feels right. This DAP even has a Parametric Equalizer that I have been using on Setting 4.There are 6 Settings in all, and while they all sound relatively good, I found Setting 4 works best with the ETHER2s.

When pausing the music and then advancing the track with my finger I found the player responded immediately. Going back and forth to different parts of the track was seamless, fast, and had zero lag.

For listening, I am using MrSpeakers ETHER2 open-back and Audeze LCD2 planar magnetic headphones. Both are fantastic cans with distinct differences that I enjoy with many genres of music.

The unit comes with what iBasso calls the AMP1 MKII module. This AMP Module has a Line Out, 3.5mm Single Ended out, and a 2.5mm Balanced out.
Using the ETHER2s one of the things that stand out immediately is the deep black that the DX220 generates. The music is more refined than the DX200 and I am hearing a mature tightness of sound that was previously unnoticeable. In listening to the Thompson Twins “Hold me Now” there is a definite improvement of detail and lushness over the DX200. Now that’s not an easy task because both the DX200 and DX220 both use the same DAC chips. However, the DX220 utilizes more high-end components inside and iBasso has implemented improved circuitry on their board. The result is, to my ears, sound that is more engaging. There’s music that makes you tap your feet, and there’s music that you feel going through your whole body. The latter is what is going on here.

Moving on to “Stayin’ Alive” by the Bee Gee’s is just…well crazy. I can only describe it as the sound feels as if it’s coming from all around you. Similar to being in a room with some of the highest-end stereo speakers. Whereas some headphones put the sound “on” your ears, and others put the sound “between” your ears…this pairing brings the sound completely “around” you. This is not something I’ve experienced many times before. It’s extremely pleasant, but also a little disconcerting at the same time. Imagine being at a club, and the music being played for YOU.

I decided to try the exact same songs with the Audeze LCD2s. Whereas the ETHER2 put the music all around you, the LCD2 put it directly between my ears. The layering of music and instruments was the same in many ways but not all. With the ETHER2s the instruments blended together while maintaining their own characteristics. However, with the LCD2s, the separation was more distinct.

Moving on to something a bit more dynamic, I cued up the remaster of Lynyrd Skynyrd’s “Free Bird”. This song has acoustic guitars, a slide guitar, electric guitar, piano, and is one of the most iconic rock songs ever recorded. I chose this because of all the songs I’ve used to perform reviews, this one either brings out the good in a DAP or the bad. In this case, it was the good. I was able to discern the strum pattern on the background acoustic, and the vocals stayed consistent throughout the track without being lost in the music. Both headphones were fantastic with this but the winner was the ETHER2.
Then I decided to put the DX220 through some heavier tracks, such as Disturbed’s “Inside the Fire”, on high gain. Even with the gain set high, and the volume over 100 there was no blurring of instruments or vocals. Everything was clear, heavy, and engrossing. Exactly how heavy metal should be! All the pauses in the music presented absolute black sound, no hiss, no buzz…just perfect black silence. Again I have to mention the maturity of the sound coming out of this unit. I have owned desktop DACs that don’t put out music as well as this DAP, and have to say the unit surprised me at what it could put out soundwise.

I like throwing all kinds of music at a DAP when testing and this was no different. From heavy, I go to Bob Dylan, to Queen’s “Bohemian Rhapsody”, which sounded absolutely surreal on the ETHER2s. Separation of instruments/vocals and the pleasure of hearing all the complex layers of that song was an experience I won’t soon forget. The song was tighter on the DX220 than on the DX200. Each word of the lyrics snapping off sharper than on the old flagship ever did. I always use the same last track to finish-up testing a DAP. The Righteous Brothers “Unchained Melody”, the remastered version. That was what brought it home for me with this player. It was literally as if they were singing right in front of me, with the drums on stage left and the strings on stage right. Yes, it was that good.

As a final test, I was even able to connect to my Sony soundbar via Bluetooth with this player and it sounded fantastic. Impressive iBasso, impressive.

Finishing a playlist with a premium DAP is always like playing with a double-sided knife. On one side, it’s nice to hear the songs in their most refined state. But on the other side, it’s kind of sad to hit STOP and take the headphones off. This rings true for all of the top-of-the-line DAPs, be it iBasso, Astell&Kern, Sony, Lotoo, or Questyle. When the music stops playing on a really good DAP, your brain is still in that semi-euphoric zone processing what you just heard. It is no different with the DX220. I can say with confidence that they hit the mark with this one.

To wrap it up we have a DAP that punches way above its weight, that sounds mature, melodic, detailed and produces absolute black when necessary. Sonically it sounds as good as some DAPs that cost 3x the price. The screen is absolutely gorgeous, responsive, and is made of Gorilla Glass. The chassis is comfortable and well balanced. It handles everything from pop, rock, heavy metal, country, and electronica with the ease of a professional boxer toying with a 5yr old. Rock solid.

The player was a hit at the Axpona show and there were a lot of people buzzing about it. Great sound, attractive UI, wireless/Bluetooth/streaming capability, replaceable AMP modules, frequent updates and only $899 USD? I can’t imagine this be anything but a home run for iBasso and for the everyday consumer. The sound is comparable to the SP1000 and WM1Z. Frankly, I can’t see any one of these being better than the other, but with such a low price point, the DX220 is able to bring high-resolution audio with the ability to hear DSD512 music to the masses. If you get a chance to hear it at your local audio shop, definitely give it a chance. It might surprise you…

Latest posts by Steve (see all)