Give the Reason-Air Studios Montserrat June 1986 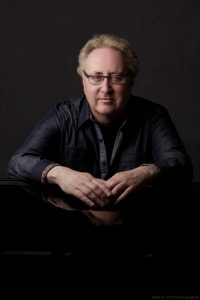 Back in the Day in the 1970’s many thought the synthesizer and electric keyboards would just be a novelty. I can’t say how many times musicians would tell me I’m wasting my time with them and I should be just playing Jazz and exploring the changes more. I loved Jazz and studied Be Bop and Classical piano with 2 amazing teachers Mike Melillo and Lucy Greene. I studied with Lucy for 18 years but my focus for my musical vision was with electric keyboards. I used to talk about the new keyboards and synths with players like Joe Zawinul, Mike Mandel, and a small group of others who thought like I did.

In 1979 a lot Changed when I got my first Prophet V. I was really good at getting very musical sounds on it. It was also very quirky as it was the first micro processor based instrument that could save programs. It crashed a lot. As time went on these instruments got more stable but making music was still like the Wild West of making music. Sequencers and Drum machines started to get introduced and with them came great music and problems as well. Syncing to tracks was always an adventure using what was called an FSK code. You would print the code to the tape then replug back into the drum machine and it should sync in time. Well that was always an adventure and sometimes not very reliable so external machines, like the Dr Click, came out, so you could sync to click. As I was developing my production chops and growing as a composer, arranger, etc, I started to get calls to do a new art in the studio called synthesizer programming. Many great keyboard players wanted to use synthesizers but they had no idea how to use them so someone like myself and a few others would come to the studio and get sounds, make sure the tracks were all together and becoming an integral part of the production.

We now advance to the mid 1980’s and my career as a programmer started to pick up steam, as between writing and producing new artists, I started to work with some great producers. One of them being Marcus Miller. In my previous columns I told you the story of making TuTu. An amazing experience that put me in the musical history books. I was doing a session with Marcus in NYC in April of 1986 and Kathy came. After the session we stopped at our favorite crazy little health food bar on West 72nd street to get some sandwiches and smoothies and when I came back Marcus was saying how he was telling Kathy how he wanted to introduce me to Luther Vandross who was getting ready to make a new album and he wanted to cross over to pop because he had taken the RnB thing to it’s highest level and they were looking to change the sound to RnB pop. I was, of course, so flattered as Miles Davis was amazing, but Luther was in a whole other ballgame, both in popularity and how much money was involved. Here’s the deal though. The new album was going to be done at Air Studios in Montserrat BWI. Wow, that is big freakin time! He couldn’t say it was going to happen, but Marcus was now going to be a producer of the album along with Luther. I tried to put it out of my mind. Three weeks later I got a call from Marsha Burns who was Luther’s project coordinator, introducing herself to me and she said Luther was looking forward to working with me. Wow! This was going to be an amazing vibe. The cool thing was that Luther invited the wives and girlfriends of the musicians to come as well. These were some major guys and Luther figured that if we were all in a place with nobody on the phones getting calls for other gigs, he would have everybody’s total concentration. What a good move.

The situation was unfolding and I had to get all of my keyboards serviced and made sure everything was in order because there would be no service centers in Montserrat. I was on my own. I had great road cases and I didn’t worry that they wouldn’t survive the trip. I had top of the line road cases for ATA Travel. My rig was a nice tight synth setup but still of size. I would bring My Linn 9000 Drum machine sequencer with a Yamaha DX 7,Yamaha TX rack, Oberheim Matrix 12, PPG Wave 2.3 and Emulator 2. I left my Minimoog home and a couple of other synths as we were cutting tracks and not doing a lot of overdubs. I also had a Dr Click 2 that would turn code into click. We used it on TuTu and other projects and it worked great. So we’re getting closer to the date in June and we have our passports and travel arrangements and we’re ready to go to Montserrat for 2 weeks. This would also be a great band with Yogi Horton, Drums, Doc Powell and Paul Jackson Jr on Guitars, Marcus on Bass and Nat Adderley Jr, who was Luther’s musical director and a brilliant arranger/Composer on piano and keyboards. Marcus would be producing with Luther and Ray Bardani was the engineer. Marsha Burns was there as well. We are at JFK and the first thing that happens is Marcus forgets his passport and has to miss the flight and come down the next day. I also find out that once we get to Antigua we have all get on a puddle jumper to Montserrat. I see Luther at the airport but don’t say anything to him as he’s bantering with Yogi, Doc and his assistant Elijah. OK we are ready to go!!. First the plane has to land on St Martin for 20 minutes then fly 15 minutes to Antigua where we then take the next flight to Montserrat. At this point of my life I really hate flying and believe it or not there is a smoking section on the plane. Crazy huh, people are in the back puffing like crazy. We are in the Lounge at Antigua and I decide it’s time to introduce myself to Luther. Luther looked great. He was thin and wearing a Gianni Versace shirt and casual pants, very island. Kathy and I introduced ourselves and he couldn’t have been nicer. He said, “Marcus says you are the best and I’m really going to need you because I want some big hits on this album.” I said, “I’ll do my best for you,” and we left him to board the infamous puddle jumper for the 20 minute flight to Montserrat. There were 14 of us boarding this little plane and I could see many nervous faces, myself included, but not Kathy, she was as cool as a cucumber. See you can take a boat there, but because of the currents, you couldn’t just go straight across to the island, even though we could see it. It would take over 2 hours by boat.

The plane departs it’s a prop, Air Montserrat. We are flying and there is a lot of nervous laughter and joking. We get above the clouds and all of a sudden the plane hits an air pocket and we drop God knows how many feet, the sighs and screams were at a high decibel level. Some of the wives did not look happy at all. And Luther Really hates flying. Remember we got some heavyweight musicians here. Ray Bardani gets up and says no way are all of us crashing today! Gee that was reassuring. Ok, now we see Montserrat! And we head towards the small runaway. We see the Volcano and the pilot makes his descent and all of sudden pulls up to make another approach. More sighs and screams. Finally on a beautiful June day we land. We leave the plane and I go to the area where they are taking out our luggage and check on all of my equipment — It’s all there safe and sound. We made it. Little did I realize how much of this adventure was still ahead…

We go to the custom area and get our bags. All of a sudden, they pick out Kathy and I, and want to open and inspect our bags. Ok, No problem, they open up Kathy’s bags and there are plastic bags filled with white powder that looks just like heroin. I’m like WHAT? Well she measured Avino for her bath and took it out of the boxes and put it in plastic bags and all of a sudden custom agents show up, Luther looks at Kathy and goes “Mrs Jason!! What’s up?” Kathy turns red, I’m looking at her. The agents all surround the bags and put their finger in the bag to taste it and then look at each other with puzzled look. Kathy is explaining its for my skin, I can’t get a burn with my skin. Everybody now is laughing (except the custom agents). They seal up the bags and let us go. We get on these flat bed trucks and it’s me and Kathy with Paul Jackson Jr and his wife Jodi. I’m like, “Man it’s a pleasure to meet you. I love what you did on the Scritti Politti album.” Paul is a very nice guy and monster musician but yes a bit valley boy nerdy. I ask him, “How is your father?” He says he’s doing great, I’m like, “send him my regards,” as Paul Jackson from the Head Hunters was the cat on bass. Paul looks at me kind of puzzled and says, “OK I will.” I said, “His work with Herbie Hancock is just excellent.” He says, “He’s not my father. My father’s name is Paul Milton Jackson”… I’m like, OK, I fucked this one up. At that point, we pull down a road and there it is Air Studios. The staff is there to meet us. The real test is coming.

Till next time when we continue the story of the studio and the sessions and the drama.