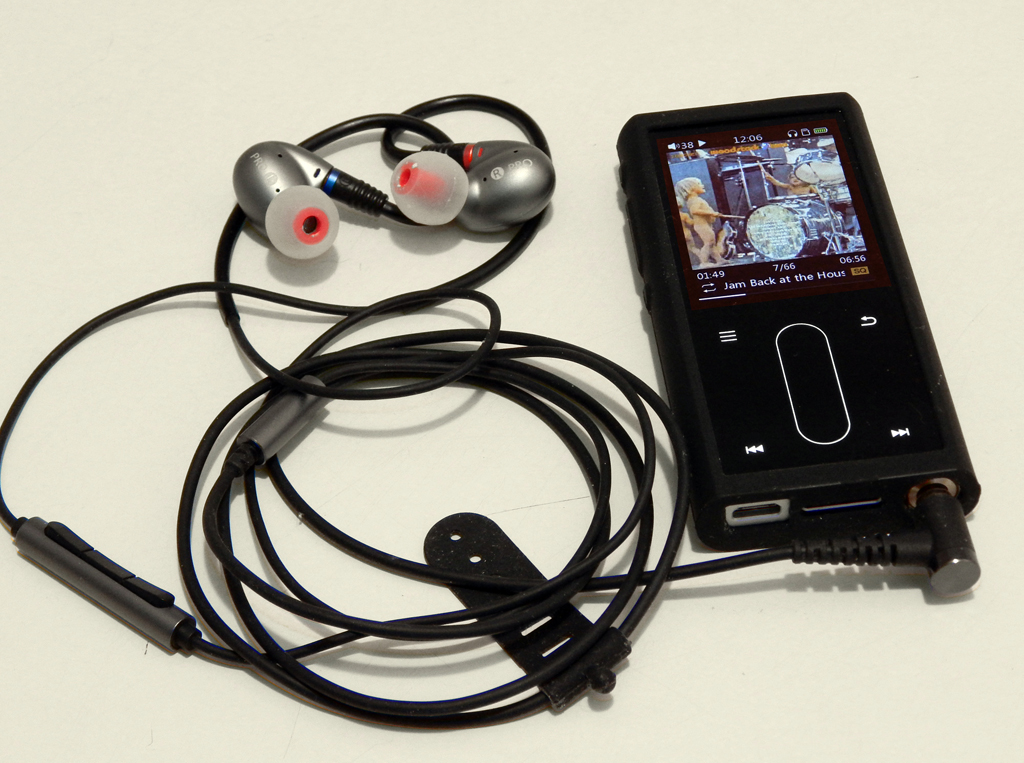 The FiiO M3K brings to mind my first mp3 player. It was about the same size, though it lacked any kind of display much less a GUI, and it fitted a 10 Meg SD card (rather than a micro SD card) and it was called an mp3 player because it couldn’t play anything else mostly because a single WAV file would be larger than its available storage. Things have come a long way since that first player, but some things haven’t changed, the M3K is still tiny, a little over three and a half inches long and one and three quarters wide and about half an inch thick, and it still uses a memory card for storage, albeit quite a bit smaller in size and quite a bit larger in storage capacity, up to 2TB should they become available. But there the similarity ends, the FiiO M3K employs an Ingenic X1000E processor and an AK3476A DAC capable of playing up to 32 bit/384kHz PCM files, as well as DSD, CUE and LRC, and in a truly unique move it can also record via an incorporated microphone; the M3K will also operate as an asynchronous USB DAC and supports USB OTG, and of course the M3K has a full GUI, with half of its face dedicated to a 2.0 inch IPS display and the other half capacitive touchscreen controls.

As one would expect from such a modestly priced product, the M3K comes in a fairly simple package. Inside the outer white picture-box is a black box containing the Player encased in a silicone skin and two smaller boxes containing the paperwork and a USB cable. On the left side of the player are three tactile buttons, Power/Wake, Volume, and Play/Pause. On the bottom are the 3.5mm headphone jack, the micro SD card slot, and the micro USB port. On the touchscreen panel, you have five backlit functions, Menu, Return, Back, Forward, and Scroll/Enter. To unlock the device after you turn it on or wake from screen off, you can either hit the Wake button again or swipe up the Scroll icon. From the home screen you have five screen choices that can be accessed by swiping the Scroll icon; Browse Files, Category, Recording, Play Settings, and System Settings. For Play Settings you have; Play Mode, Resume Mode, Playback Gap, Max Volume, Default Volume, Fixed Volume Setting, Balance, Equalizer, and Play Through Folders.

When I first received the FiiO M3K, I charged it up and set it to burning in the Quad ERA-1 over the ear headphones. It ran for over 24 hours without a problem driving full-sized planar magnetic headphones! I later set it to work burning in the MrSpeakers ETHER C Flow 1.1 headphones with which it also had no problems.

While the Quad ERA-1 were an excellent match sonically with the M3K, especially listening to “Freeway Jam” by Jeff Beck (Blow by Blow – DSD), Max Middleton’s Rhodes growling to the thump of Phil Chen on Bass and the throaty beat of Richard Bailey’s Kick Drum each roll of the Toms palpable, at $799 they were probably a little rich for player in the FiiO’s price range so I switched to the 1More Triple Driver over the ear headphones.

Though the Quads required ¾ volume the 1Mores were happy with 2/3rds. The combination of the FiiO M3K and the 1Mores had great synergy as evidenced by Stan Ridgway’s “Camouflage” (The Big Heat – 16/44.1 kHz), the rich bass and snappy highs of the 80’s electropop tune enhanced without harshness or veiling of clarity. The soundstage was presented with a medium club’s sense of space.

For a look into orchestral performance, I chose “Think of Me” from The Phantom of the Opera: Original Motion Picture Soundtrack (DSD). Though the vocals were a bit intimate the orchestra was large enough if a little heavy on the bottom end.

Selecting the FiiO F9 PRO IEMs I cued up “Marlene on the Wall” (Suzanne Vega – Suzanne Vega – 16/44.1 kHz) and was treated to a surprisingly large soundstage and excellent tonal balance with Suzanne’s voice very natural and realistic. Again, though a little lighter on the bottom end, there was none of the abrasive brightness usually associated with cheap amplifiers and cell phones.

Not having an OTG cable, I connected the M3K to my computer instead, using the USB DAC function and put on “Everybody Loves Somebody” as performed by Dean Martin (Everybody Loves Somebody – 24/96 kHz). The soundstage was large dinner theater. And just to check the resolution of the M3K I switched between the 44.1K version and the 96K version and there was definitely a difference with the 96K coming out smoother more musical with a slight improvement to soundstage and instrument placement.

My next step was to test the recording capabilities. It took a little experimentation, but the recording function is pretty straight forward though you probably want to set the screen timeout to “On” if you are going to be recording as the controls lock when the display goes off. Though there is a small hole in the silicone skin for the microphone it does not appear to be particularly directional. To get a read on sound quality I took the M3K out to my living room and set it on the piano and played a few tunes. The sound quality was surprisingly good, certainly good enough for the occasional memo for which it is intended or even to capture the odd local band at the pub.

A little about the UI, it is very intuitive, I never needed to consult the owner’s manual except to find where the microphone was, but just about anything can be found via experimentation. There is a menu that is only accessible while a file is playing and you need to exit the record menu twice, first time stops the recording, and second time saves the recording. Turning off the “Lockscreen Clock” prevents you from having to press the “Wake” button twice. The EQ is preset only but is accessible on the fly by tapping the Menu button while a track is playing. The other on the Fly functions are “Add to Favorites”, “Add to Playlist”, “View Track Info”, and “Delete file”.

The FiiO M3K Portable Music Player is an incredible value for the money. While not lavish with extra features like internal storage (which you never use), WiFi and Bluetooth, full touch screen control (not practical on a player this small), full-blown Android OS (I set their upper model players to “Music Only” anyway), and Apps (you might as well complain that it doesn’t have GPS or a camera while you’re at it) it is offered at a price that contains few competitors and provides excellent performance and reliability.

The sound quality is very good, though not necessarily audiophile grade, it is able to drive full-sized headphones and is very musical providing superior sound to most smartphones and many DAPs I have heard, and does so in a very convenient package that’ll easily slip into your pocket. It has the best battery life of any portable player I have auditioned, including smartphones, and has one of the most intelligent GUIs to boot. Highly recommended for first-time users.