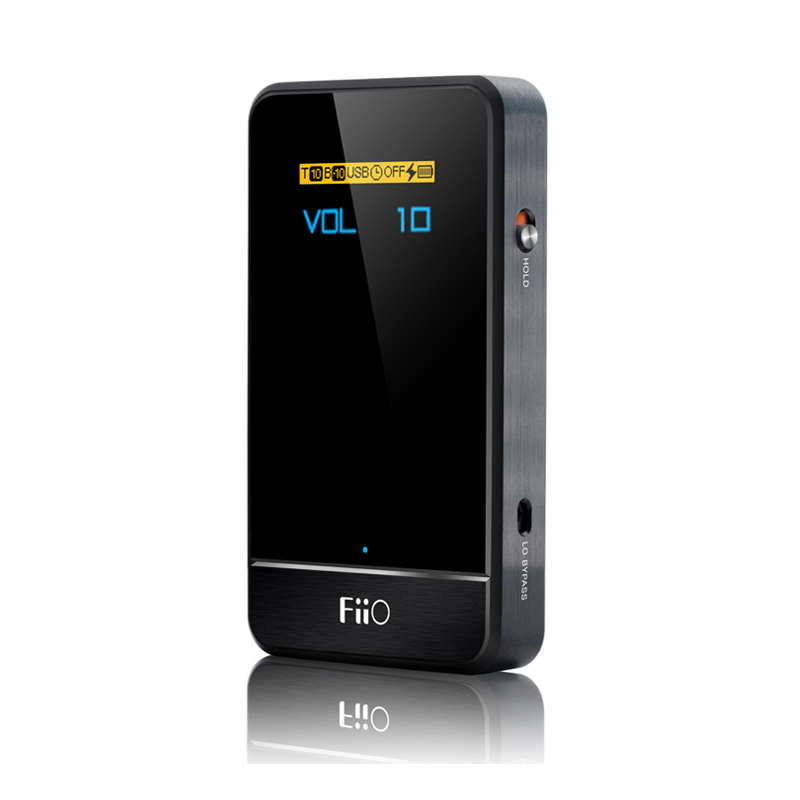 For the past several years, the Chinese-based electronics company Fiio have been building and assembling budget audio gear. My first headphone amplifier was a Fiio E11. I imagine that for many headphone and audio enthusiasts of my generation, Fiio were a good spring board to other more exotic gear. We all have to start somewhere and for me that somewhere was Fiio. When I think about it, my first two headphone amplifiers were Fiio amps; the E11 and E17. The E11 gave me my first taste of what an amplified headphone could actually do. I remember the smile on my face at the time when I plugged in my HD595, I even remember the track; it was Paul Simon’s “Diamonds on the soles of her shoes”. One of the reasons that I am excited about reviewing the E07K is to see if Fiio have managed to pack their usual level of quality into a product so cheap. They seem to be a company that can reach a nice standard in terms of audio whilst keeping the price very affordable.

The Fiio E07k “Andes” is a reboot of the older Fiio E07 and was released three years after the original E07. There are a few main differences between the two devices. For one, the Fiio E07k offers a longer battery life. Another thing to take into account is the E07’s DAC is capped at 16/44.1 whilst the E07K offers lossless music playback at 96 KHz/24bit with the use of Tenor TE7022 as USB receiver. 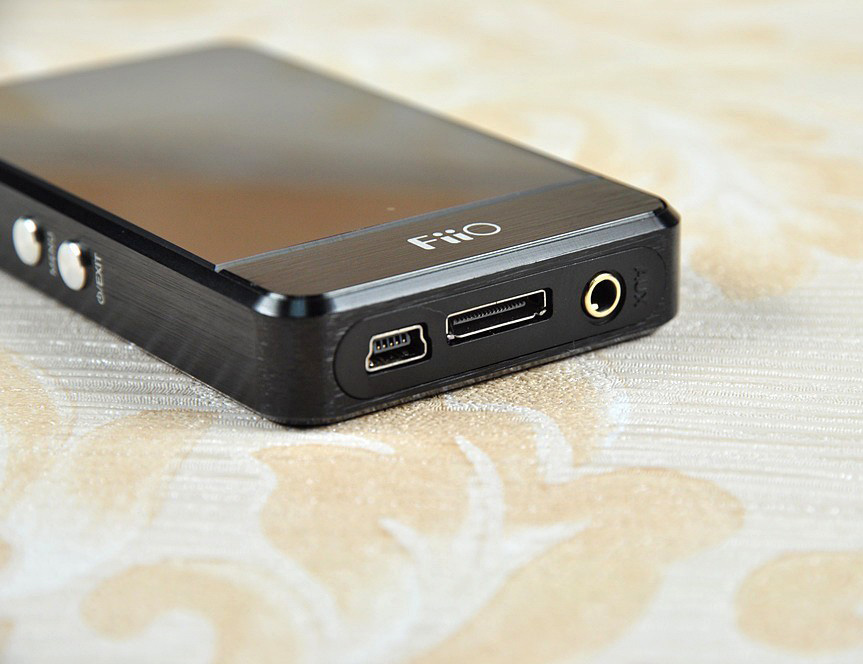 One of the strengths of the Fiio E07K is its sturdy build and beautiful sleek aesthetic. It comes encased in black polished aluminium with a plexi-glass reflective surface on the front panel. Beneath the plexi-glass panel is a rectangular digital screen housing a 128×64 pixel OLED display. The screen is basic and only shows the volume level, battery level, and a menu display for equalization. There are two circular aluminum buttons nicely placed along the side of the amp for adjusting the volume and underneath those are another two; an on/off switch and a button for switching between the menu options. On the other side of the device are another two circular buttons; a hold button and a low bypass switch. There are two headphone inputs on top of the E07K and on the bottom is a slot for charging which also doubles as a USB DAC, located beside this is an auxiliary line out for connecting to an MP3 player.

The packaging includes a nice black rubber case which is great for protecting the amp from the elements while on the go. If that wasn’t enough Fiio also include a beautiful velour carrying case. There are also 2 plastic screen protectors to cover the display screen but they are slightly annoying because they peel and dirt gets underneath. Fiio have included 2 pairs of rubber bands to attach the amp to your player and a set of padded rubber feet that act as an anti-scratch mechanism.

The Fiio E07K is surprisingly light and durable. It only weights 102g and the dimensions are 96x55x15.5mm making it perfect whilst travelling outdoors. I barely noticed the added weight when carrying it around regardless of the player I used (iPod or Cowon). I love the matted black finish but if I were pushed to find a fault in the design it would be the plexi-glass panel on the front. The glass itself looks fine but it shows fingerprints and stains easily. However, the E07K is a much nicer piece of gear to look at than the E11. The fit and finish screams quality and I think for anyone choosing between the two devices, it would be hard not to pick the E07K over the E11. The battery life is another great feature, as it can last a full 24 hours when fully charged in portable mode.

Unfortunately, unlike its bigger brother the E17 the E07K does not have a SPDIF input, this must of been one of the ways that Fiio were able to cut the price down. 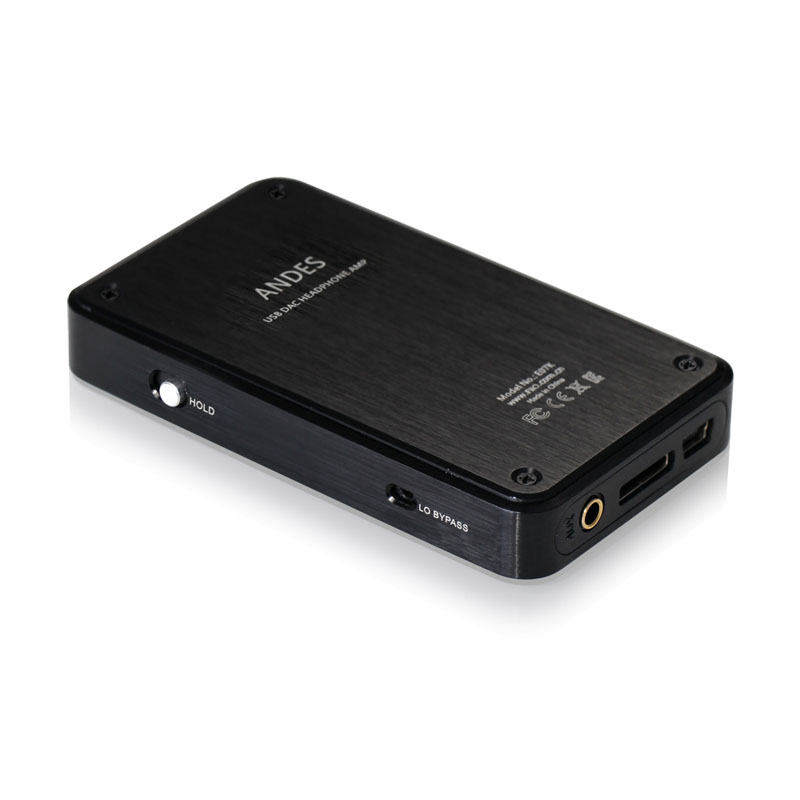 The sound of the Fiio E07K is surprisingly good when you consider it only costs $90. I own the Fiio E11 and would definitely consider the E07K an upgrade. The sound signature seems to be much more neutral and balanced compared to the E11. The bass in the E07K is much more controlled and not as boomy or impactful but you can adjust the settings inside the device. There is a treble, middle and bass equalizer built in and it can be adjusted using the buttons on the side. There is no clipping and very little distortion even at extremely high volume – a credit to Fiio and their implementation of the MX97220 op amp.

The E07K has no problem powering any of the headphones that I used with it. Some of the cans I used were the Sennheiser HD595, HD280 pro and the Shure SHR 440. It sounded best with the HD595’s but those headphones are not really suited for travelling – for that I used the SHR 440’s.

The E07K can be used as a DAC/Amp,but only with your laptop and unfortunately not with most portable players. I noticed a huge improvement when I connected it to my Lenovo laptop. The difference was night and day. Everything was immediately better – larger soundstage, added extension at the low end with additional slam. The middle was a lot more expansive and opened up. The treble was well extended with only the slightest bit of edge at the top but over all very engaging. The DAC chip inside the E07K is a Wolfson WM8740. I happen to have come across this chip a lot in the past few years as it is in my E17 and the Beyerdynamic A200p.

I did a brief review of the A200p a couple of months back and overall I thought the DAC/Amp from Beyerdynamic was good, but for the price ($300) I expected a bit more. This is where I think the Fiio E07K pushes ahead. Although the A200p was slightly more refined, it wasn’t impressive enough (in my opinion) to justify the extra $200. When you take into consideration the superior build quality of the E07K, I can’t help but think that it’s a better deal. 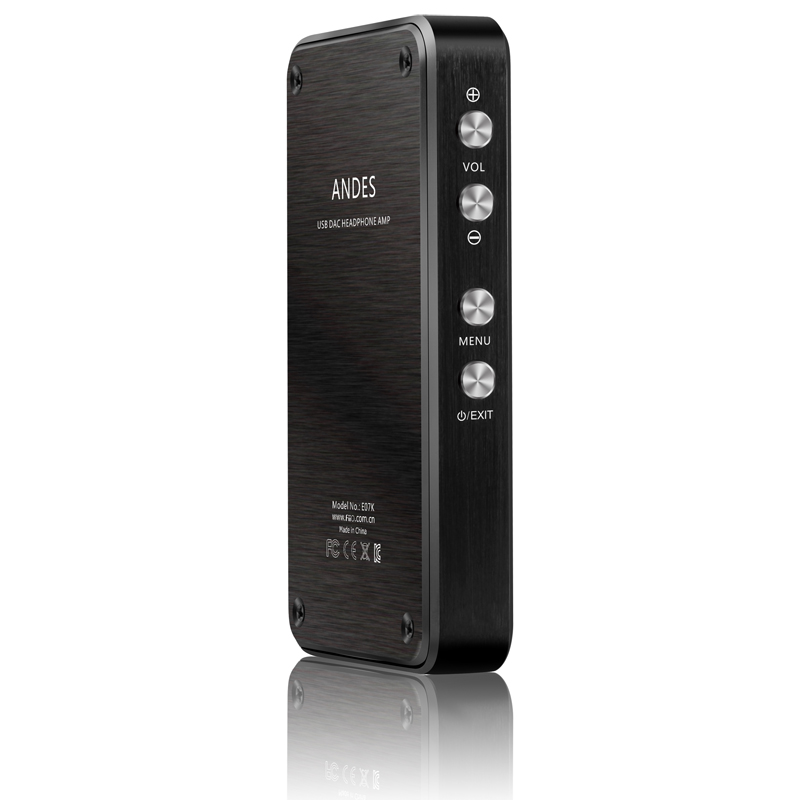 The majority of my listening with the E07K was done on the go and used as a portable amplifier for my Cowon J3 and iPod Classic. I never leave my house without my headphones and portable amplifiers have become a must-have for me over the past few years. I tend to listen to particular genres while walking. Usually its progressive rock and soul funk/fusion, this kind of music just suits my mood when I’m moving about. So, I found myself choosing artists like Stevie Wonder, The Meters, Parliament Funkadelic and Rush. One particular album that stood out over the past few weeks while using the E0K in portable mode is the album Tower of Power, by the band of the same name. This is such a fun album. It has everything in it that suits my tastes – excellent vocals, unbelievable musicianship and incredible production. The added bass boost really made the over-all experience a lot of fun. I am by no means a ‘bass head’ but in this case, and for this album I think the added adjustable bass feature on the E07K really works. On the first track “What Is Hip” the E07K does a great job of highlighting the screaming guitar intro and the drums especially the high hats and snare; they have a crispness that is very inviting.

Stevie Wonders classic album, Songs in the key of Life, sounded terrific with the E07K. The percussions on the track “Have A Talk With God” had this all-encompassing feel with how they were placed in the soundstage. It was almost like I was sitting behind the drum kit myself at times. The album as a whole is an amazing achievement and Stevie’s playing is immaculate. I always enjoy these types of up-tempo albums while walking and the Fiio E07K made the album a thoroughly engaging experience.

The Fiio E07K has become a keeper and replaced my E11 which I now only use as a backup. It isn’t the ‘be-all’ and ‘end-all’ in portable amplification and might not suit everyone’s needs, but it does challenge a lot of portable players that cost considerably more. For example, I have recently sold my E17 preferring the E07K because I don’t need the added quality on the move (I leave that for my desktop rig) that the SPDIF allows, preferring just the 16-bit playback. I don’t think there is another product on the market that can offer the build quality and sound performance that the Fiio offers for less than $100.