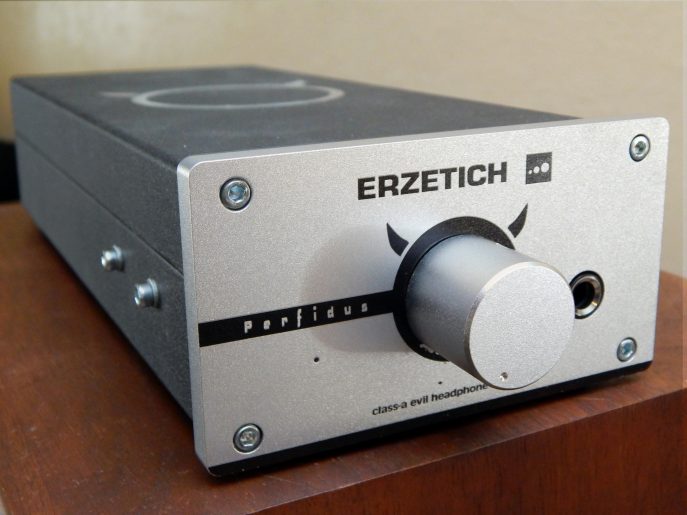 The dedicated headphone amplifier is the core of personal audio. Many may think it is headphones themselves, but the truth is that headphones have been around for a very long time, and with the rare exception, outside of pro audio, the dedicated headphone amplifier is a fairly new phenomenon. Like the two channel audiophile community, personal audio grew out of the hobbyist community, and hobbyist means amplifiers (though headphone mods were certainly a factor). Small groups of headphone enthusiast who were dissatisfied with the performance they were getting from their portable music players and receiver headphone outputs, would get together to discuss and compare notes on their creations in an effort to achieve audiophile levels of sound quality. Many of the more successful designers would go on to mass produce their designs, so that others could enjoy the same level of performance.

Blaz Erzetic is one such audio enthusiast turned designer and ERZETICH, founded in 2012 in Slovenia, is one such company.

The Perfidus is a solid state class A amplifier following a basic design protocol of simplicity and best available components. The unusual shape of its chassis, a depth about three times its width, is due to the necessity of isolating the power supply (at the far back) from the amplifier section (in the front) to provide the lowest possible noise floor. The goal was to produce an amplifier with an extremely flat frequency response (4Hz to 40kHz with a dip of only 1dB), with incredible impact, able to drive a wide range of headphones.

ERZETICH’s simple and elegant, slightly industrial appearance exhibits attention to detail and a high level of quality control, and the use of WIMA capacitors, an ALPS Blue Velvet volume control and a toroidal transformer show a dedication to audiophile quality sound.

ERZETICH recommends 15 hours burn in before listening, but I noticed a real change (a distinct mellowing) at about a hundred hours. I used my MrSpeakers ETHER C Flow headphones and the OPPO Sonica DAC to burn in the Perfidus, consequently my initial listening was done with that combination. As both the Perfidus and the Sonica fall out on the revealing side of things, it may have been a little too much of a good thing as the overall presentation shifted a bit to the blue side of things rather than red shining a fairly bright light on source material. As a result the harpsichord of Blood, Sweat and Tears‘ “The Battle” (Blood, Sweat and Tears 3 – DSD) felt a wee thin, and the cymbals were very lively. The horns came across a touch brassy and the sibilance of the vocals was pronounced. While the OPPO and ERZETICH are a great match budget wise, I would recommend a more forgiving headphone such as the Fostex for the pair.

Switching to my reference DAC the Questyle CAS192D I got into serious evaluation mode. The Perfidus performed excellently with classical music, adding a reverberant air to the opening cellos of “The Firebird Suite” (Robert Shaw & the Atlanta Symphony Orchestra – Stravinsky: The Firebird; Borodin: Music from Prince Igor – 16/44.1 kHz), while manifesting a large airy soundstage, evincing the minute details of the interwoven strings. Easily able to keep up with the extreme dynamics of the crescendos and tympanis the ERZETICH gave a very realistic presentation.

For live music the Perfidus put you in the front row with concert level dynamics and open air arena attack on the guitars and percussion of “Izabella” as performed by Jimi Hendrix at Woodstock (16/44.1 kHz), the bass guitar prominent and impactful.

I had a similar expansive hall experience with Louis Armstrong rendering “What a Wonderful World” (DSD), ole Satchmo, the guitar, upright bass and vibes immediate with a large orchestra and choir in the background.

To get a different point of view as to the load department, I swapped in my Noble Katanas, a task not for the meek, given ¼ volume would be much louder than I could stand. The Perfidus handled the challenge admirably with only a modicum of gain noise, though it did occasion me to move the amp away from the huge toroidal transformer of the DAC reminding me of their comments on the ERZETICH web page about EMF issues. Seu Jorge’s chill inducing baritone was expressed tactilely, the sound of his finger plucking the acoustic guitar reproduced in minute detail as if it were next to me in the room (“Life on Mars” – The Life Aquatic Studio Sessions – 16/44.1 kHz).

Intimate is the only word for the Perfidus portrayal of the Persuasions singing “Imagine” (The Persuasions Sing the Beatles – DSD), the lead in front of me and the others sitting on either side of me.

Flipping over to the 1MORE Dual Driver IEMs I was once again impressed at how well the ERZETICH worked with balanced armature drivers. The piano of Regina Spektor’s “Field Below” (Begin to Hope – 16/44.1 kHz) was rich and immediate, the 1MOREs taming the Perfidus tendency towards sibilance making her voice very close and real.

The Organ Bass of “Koyaanisqatsi” (Phillip Glass – 24/96 kHz) was deep and resonant, while the upper registers were bright, clear and articulate.

Feeling that using a DAC that cost almost twice what the amp does was not giving a complete picture to the reader, I popped in the Questyle Audio QP1 to give a more fair comparison. Of the three DACs I tried this was the most compatible, the QP1’s warmth compensating for the Perfidus’ slightly analytical presentation making Peter Gabriel’s “Family Snapshot” (Peter Gabriel [III] – DSD) an absolute joy to listen to, with a huge sound stage, the layered instruments gradually building to crescendo detailed yet musical, the percussion tight and impacting, Peter’s voice emotional and velvety.

More so Liz Phair and “Polyester Bride” (Whitechococolatespaceegg – 16/44.1 kHz) the bass deep and pulsating, the choral of guitars and organ exciting without being fatiguing, the total presentation engaging and visceral.

Returning to the ETHER C Flows a replay of “Polyester Bride” was the highlight of my audition, deep tight Bass, open soundstage with infectious detail.

I closed my listening with Peter, Paul and Mary’s live version of “Blowin’ in the Wind” (In Concert – DSD), I was completely transported to the front row center the guitars and singers each placed on stage just so.

Though tongue in cheek, ERZETICH was very daring in naming their amplifier the Perfidus. In a very real sense she will not lie to you, what you put in to her she’ll give you back, in spades, on the other hand, if what you are looking for is the illusion that you are in the room with the musicians, that’s a lie she is more than willing to make. Make no mistake, the Perfidus is a solid state amplifier, taking full advantage of what that has to offer, if you are looking for a warm forgiving tube-like sound, look elsewhere, but if you like crisp accuracy it is an excellent choice.

So, did they achieve their goal to produce an amplifier with an extremely flat frequency response, with incredible impact, able to drive a wide range of headphones, as I never used more than half volume, it has enough go to run most any headphone, so I would say, “Yes, absolutely”.

As to the down sides, I would like to see a little higher damping factor, and, weirdly, the inputs are reversed (that is to say, looking from the front, the right input is on the left), but other than that, and the caveats mentioned above, I feel it is an amplifier I can recommend whole heartedly.