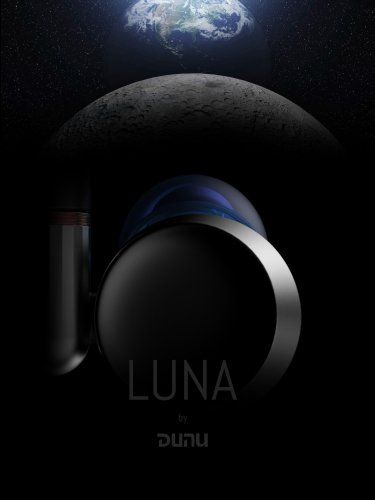 Over the years, DUNU has accrued a ton of experience building earphones and drivers; a few years ago, we reexamined our core technologies and thought long and hard about how we could make a major contribution to the high-fidelity audio space. The result is LUNA, the culmination of nearly three years of dedicated, intensive research and development. Akin to the Apollo program, the development of our new flagship was tantamount to a moonshot project, acting as a galvanizing force behind much of DUNU’s technological progress and evolving design language over the past couple of years, beginning from the second half of 2017.

Just like how NASA’s engineers worked around the clock to send Neil, Buzz, and Michael to the moon, we did too, pooling together our over 17 years of experience designing and making high-end earphone drivers, going through countless design iterations, tearing through sheet after sheet of raw
material, and breaking loads of would-be drivers. Now that it’s finished, we consider LUNA to be a true engineering breakthrough in the world of audio. It comes on the heels of the 50th anniversary of the very first lunar landing, and as a proud member of the Head-Fi community for the past 10 years,
we were beyond thrilled to allow everyone to see and hear it at the final CanJam event of the year in Shanghai between November 9 ~ 10, 2019.

The reception so far has been immense.

DUNU has partnered with Hangzhou-based industrial designer and long-time audiophile Moses Xu and his team for the LUNA. Xu previously worked with DUNU on the industrial design for the DK-4001. The continued partnership marks renewed focus by DUNU on putting forth a concerted
design language for our products.

LUNA is a story within itself, reflecting the spirit of the first moon landing 50 years ago, and elevating the manner in which in-ear monitors are perceived.「玥」 the representative Chinese character for the LUNA, signifies a heavenly, pearlescent gift from the gods. And from this luminous, round canvas, Xu worked to elevate every design element for the LUNA, blending them seamlessly with an overarching moon landing theme.

LUNA’s circular, concave faceplate serves as a physical representation for the changing albedo of the moon across each moon phase, while the asymmetric lip delineates waxing and waning crescentic shapes. The outer facet of LUNA’s CNC body of custom-formed titanium alloy is sandblasted to reflect subtle specular highlights, just as the craterous central concavity draws in a penumbra of shadow. The inner facet of the body preserves distinct lines created by the machining process, creating natural contour lines much like a topographic map. Functionally, the concave recess and slanted lip allow LUNA to be inserted and removed comfortably.

Whereas the body of the LUNA is contoured, the beveled edges of the cable connector interface represent a more technical facet to the moon theme — an abstract representation of the Apollo spacecraft, its Columbia commander module, and its Eagle lander. Transitioning from man-made
starkness to celestial fluidity, the smooth, domed end cap serves as a point of transition from human engineering to planetary body. From the side, with cables attached, one can make out the profile of an orbital path taken to the moon. Finally, when turned on its side, custom-made blue silicone tips serve as a reminder of Earth as seen from the Moon.

So what makes LUNA special and why was it so challenging to develop? It starts with a diaphragm material made from pure beryllium.
Beryllium is believed to be the ideal speaker material. Historically reserved for applications related to aerospace and medical fields, the metal was identified to be exceptional for sound reproduction by way of several of its intrinsic properties, beginning with its extremely high stiffness-to-mass ratio (high Young’s modulus, low density). It allows beryllium to possess a very high speed of sound of over 12,000 meters per second, around two and a half times faster than other commonly used cone/diaphragm materials like aluminum. The very low Poisson’s ratio of beryllium potentiates its ability to maintain pistonic motion of the driver, even at the edges of a diaphragm, and in turn preserves the imaging properties of the music being reproduced. The very high Debye temperature of beryllium also means the lattice structure of the beryllium metal is retained even at very high frequencies, translating to remarkable treble evenness. All these unique properties of beryllium enable audio designers to gain extra octaves of clean, non-distorting, non-ringing, high-resolution sonic output at both ends of the sonic spectrum.

This reputation of beryllium as a wonder material for audio has translated to a bevy of products made to contain beryllium as a diaphragm component. Only a tiny handful, though, use truly acoustic grade, rolled foil beryllium. Instead, most are created via physical vapor deposition (PVD), sputtering a thin film of beryllium onto a conventional polymer diaphragm material like PET within a vacuum environment. This coating technique was first introduced with Pioneer’s famed TAD division back in the late 1970s, when it deposited multiple thin layers of beryllium atop aluminum domes. Our own 17th Anniversary Limited Edition model, DK-4001, DK-3001 PRO, TITAN 6, and upcoming DK-2001 also all utilize speaker diaphragms with beryllium coated via PVD to varying thicknesses.

While this technique remains an economically viable means of delivering a beryllium-like sound quality to the listener, several major challenges are associated with PVD beryllium coatings: durability, limitations to thickness, and non-ideal metal grain structure. These coatings are often brittle, only a few microns in thickness, and possess a relatively coarse grain structure. Rolled foil beryllium overcomes these limitations, and that is why flagship level products in the speaker and full-sized headphone world tend to use this type of beryllium material. It is more durable, thicker, and finer-grained.

The acoustic grade rolled foil beryllium at the heart of LUNA’s 10-millimeter speaker module is sourced from Materion Corporation (née Brush Wellman Electrofusion), the world’s foremost extractor and processor of beryllium metals. Having supplied NASA and the top aerospace conglomerates in the world, as well as major medical device manufacturers, no one has the same amount of experience in refining and processing beryllium. They have a beryllium mine in Utah, a primary processing plant in Ohio, and an advanced processing factory in California. Their TruExtent® speaker domes are used in the highest end hi-fi speaker systems and headphones in the world. We took the same technology and miniaturized it to the in-ear level.

The major engineering hurdle DUNU had to overcome during the development of the LUNA was the process of getting the rolled foil beryllium diaphragm to be bonded circumferentially to a very thin polyurethane suspension. Doing so required formulating bespoke glues, lightweight and thin enough so as not to impact the total weight of the acoustic system, and reliable enough to be glued evenly against a very thin lip and still confer enough durability to sustain the immense mechanical energy delivered during driver excursion. To harness and control the motion of the beryllium foil, LUNA’s N52 Neodymium magnetic system was custom-ordered with added thickness for much higher magnetic flux across the European-imported CCAW voice coil.

After many design iterations, DUNU was able to meet and exceed our target performance metrics in our computer simulations, and further proved by high-speed vibrometry conducted by a third-party entity. The next step was refining the sound tuning, and this step had to start with the housing material. The base material of the housings for LUNA began as grade 5 titanium alloy. Known for its structural integrity, grade 5 titanium alloy is notable for its prevalent, workhorse-type use in aerospace and other industries where the strength of titanium is its highly important. But we reformulated this alloy with a custom-modified composition to minimize the ringing properties of titanium. Doing so allowed DUNU to bring out the natural, ‘colorless’ timbre of its beryllium driver.

Computer analysis of high-speed vibrometry of LUNA’s pure beryllium foil driver. The domed beryllium foil is bonded circumferentially to a thin polyurethane suspension, and thus preserves its pistonic motion almost entirely across the full surface area of the driver.

As our flagship product, LUNA was tuned to a reference sound signature — deep and natural imaging, even and smooth from top to bottom, and maximized for extension at both ends. The result is the most supremely detailed, transparent, sumptuous sounding earpiece ever crafted by DUNU. It is our best representative of beryllium’s full sonic potential, and we are absolutely thrilled to have everyone experience LUNA.

Full-scale production commences in December 2019, and widespread release is anticipated prior to CanJam New York in February 2020. LUNA will retail for $1699 US dollars and ¥11800 RMB, respectively. For more information, please message us on Head-Fi, on our social media platforms
( Facebook, Instagram, Twitter), or visit our website: https://www.dunu-topsound.com/