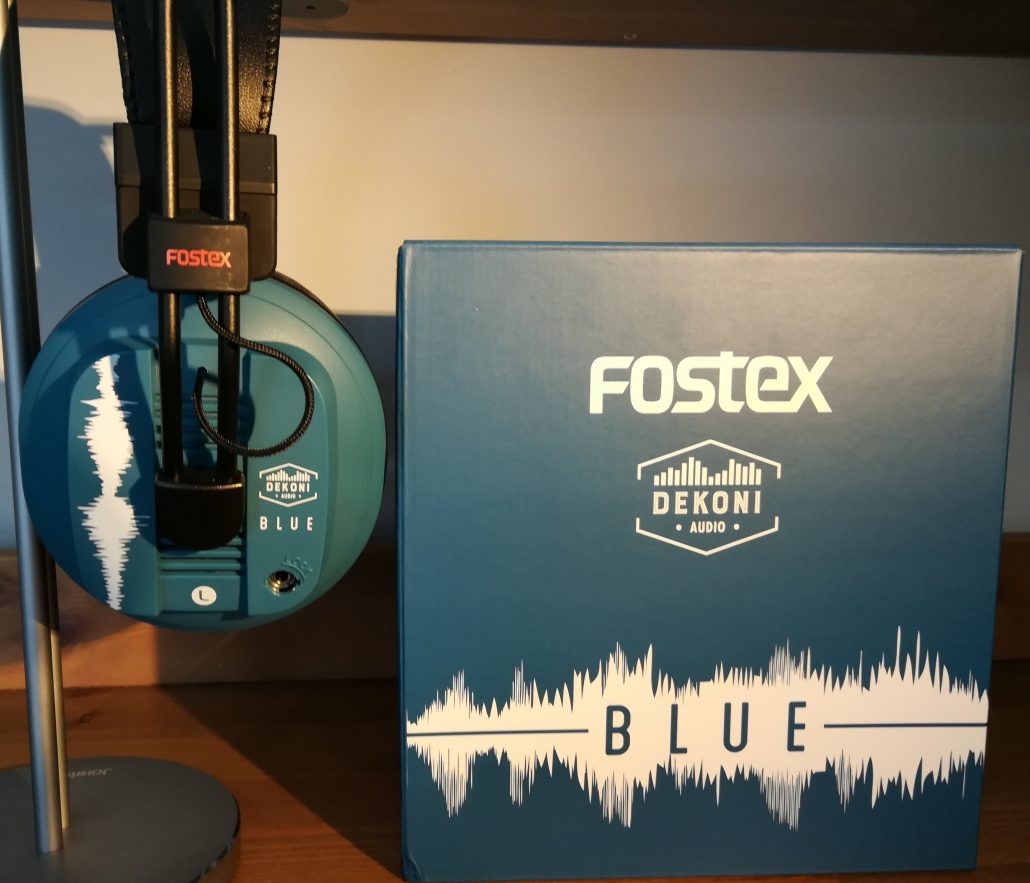 It wouldn’t be a lie to say that the Fostex T50RP are the most well known planar magnetic headphones on the planet and probably account for most enthusiasts first foray into this driver technology. The T50RPs are legendary in our world for being an affordable behemoth and for having insane modding ability. We have seen this time and time again with thread after thread on Head-Fi as users keep finding new ways to get the sound and quality out of this headphone. Mr. Speakers is also famous for having his Mad Dogs which were an unofficial production of a T50RP already modded.

Today, I have the Dekoni Audio Blue (MSRP: $299) which is a collaboration effort between Dekoni Audio and Fostex to produce this official T50RP MKIII ($160) modded unit. Dekoni Audio is renowned for its high quality aftermarket ear pads and has even partnered with a plethora of companies to develop pads for them as well.

The Blue starts off as a base T50RP MKIII before the engineers at Dekoni get their hands on them and customize it. The primary differences are the outer color scheme, Dekoni custom hybrid pads for comfort and sonic tuning, internal driver housing modifications, and cabling. It may not seem like much at first but believe me when I say it changes the playing field completely.

The outer color scheme was revamped from the original black and dreary look. Whereas the original was more suitable for a studio professional closed off to the world, the new units have a mid blue color scheme with a modern take on design. A sound wave adorns the outside on both sides giving them a look that is more ‘hip’ and contemporary. The new appearance essentially changes the ‘idea’ of where these headphones should or could be used from a production studio to being worn outside or at cafes.

Let me just say that the box the Blue’s came in look wicked. Great use of ‘white space’ (blue in this case) around the two collaborative logos in a central alignment before we get the sound wave with the Blue model imposed in between it. It’s an exceptional design to be honest. Everything inside was packaged compactly and I was able to get it all out without much hassle which is a big thing for me. If I have to bring out the knife and scissor and carefully slice my way to get to your product, you’re doing it wrong. Dekoni passes this test with flying colors.

To align with this idea, Dekoni has given the Blue’s a new 2 meter cord, down from the unmanageable 3 meter one that comes with the stock T50RP MKIII; both are still detachable. It currently terminates directly to quarter inch with a beefy housing and strain relief. A quarter inch to 3.5mm adapter is included with the package.

Without a doubt, the biggest change to the Blue would be the headphone pads. They are the most comfortable pads I have used ever. They have endured multi-hour long sessions without needing to be taken off thanks to their plush but supportive high-density foam and light clamping pressure. Dekoni notes that their hybrid pads are made up of a combination of three materials. The pads have “sheepskin on the outside, velour on the face of the ear pad for comfort, and Dekoni’s Fenestrated Sheepskin on the inside of the ear pad for a smooth transition of sound from speaker to ear”.

The pads have a dual purpose functionality with the Blue. They aren’t just for comfort but also have a unique shape to tune the sound of the headphone. The changes I can see that would affect sound include:

These pad modifications from Dekoni along with their internal changes (most likely to damping material and porting) have created a completely new sound signature than the original base T50RP MKIII. Every single change to the Blue has increased the level of personal usability, comfort, and sound from the originals to a new plateau. They are on a whole different level.

On the top of the headband, the Blue’s also sport the words “DEKONI” on it. It’s a popular fad that headphone manufacturers do to market their company when others see you using it. One problem though, the words are upside down when you wear the headphones around your neck. I’ve confirmed with Dekoni that this is how it will be in the production version as well. So close Dekoni!

The sound of the Dekoni Audio Blues is deeply warm, dark with a slight mid recession, featuring a desirable amount of bass, and a slightly narrow soundstage. It’s most suitable for listening to modern pop, hip-hop, EDM, jazz, drums, and other harder hitting genres that aren’t reliant on blistering mid frequency clarity or performance.

Just because the Blues are ‘most suitable’ for those genres doesn’t mean it doesn’t sound great with clean and classic types of music. If you have ten headphones to swap around with to get the best reproduction out of an album then sure, but I’ve still had a respectable experience using the Blue’s for everything I’ve thrown at it.

I selected the track “Katawaredoki” by RADWIMPS which is one of the titular songs from the hit animated film “Your Name” by Makoto Shinkai to demonstrate this. The song is exceptionally light with an emphasis on a clean and slow piano while accompanied by string instruments before hitting into a strong symphony of instruments coming together at once for a finale. The Blue, even on the quiet and solemn sections, reproduced the mid range instruments with ease and good texture. It was missing some of the upper frequency extensions of the piano and were not as forward as I wanted them to be, but was adequate for the price point. Whereas some headphones with good bass have a low frequency section that often intrudes into the mid frequency realm on quieter songs, the Blues ran a tight ship and kept its bass in check. One aspect I enjoyed heavily was that the planar drivers gave each key press of the piano a solid pressure and weight behind them. It sounded realistic and improved the song’s energy.

The next track up was a live recording of “Theme of Laura” which is a popular song from the video game Silent Hill 2. The first thing I noticed was how prevalent and proper the guitars sounded. I expected a duller response after hearing that the Blues were modded to decrease high frequency brightness and had coverings over certain portions of the driver. Instead, I was greeted with a reasonably clear, albeit slightly recessed, guitar riff playing the song’s main theme. The sound was mellow and comfortable but lacked some of the sharpness I would have wanted. Detail was above average and clarity was fair. The Blues are somewhat narrow in their soundstage, the sound is pretty much piped to you like a standard earphone is. But hey, did anyone not expect this? It’s a closed headphone with internal modifications, thick pads, and with an oval shaped pad center for sound delivery. I did not mind this honestly, as a wide soundstage isn’t everything to a headphone. It’s something lots of audiophiles look for in a TOTL headphone, but who said anything about reviewing one of those today. It’s a fitting sound for a modern and pop oriented headphone. It seriously works with everything I’ve thrown at it.

Lastly, I listened to “Witchcraft” by Pendulum on their last album Immersion. This is perhaps the best genre for the Blue. The slight v shape melds very well by putting the bass, drums, and rhythm of the song at the forefront and the accompanying vocals in the rear. The only word to describe this would be “experience”. Rob Swire’s soft vocals before the track enters its actual heavy introduction was an experiential moment of hearing a performance akin to a feather and hammer clashing together. It was strong and featured just the right amount of proper bass backing when the song desired and none during portions without.

Comparing the Blues to the original T50RP is like sitting on a LAZBoy sofa versus a public park bench. The T50RP was more bright and had better upper mids but it also had a more fatiguing signature. That’s without even mentioning that the pads on those are like sleeping on cardboard. I wouldn’t be able to wear those for more than half an hour. The sound signature between the two are polar opposites. The T50RP were cleaner but also thinner sounding whereas the Blue’s have a very thick tonality to it with a stronger bass response.

Despite being based off the T50RPs which were famous for studio use and analyzation, I found the Blues to have little of that trait remaining. It’s a modern headphone with a contemporary take on its sound signature. I found it to be similar to the Focal LISTEN in regards to the market its sound is designed towards; poppy, and deep bass with a non fatiguing vocal range.

I wondered to myself many times if this headphone wouldn’t be more suitable for use on the go. It’s compact and light enough to do so and is also attractive looking.  Thus the Blues seem to me, at times, to have a small identity crisis in this matter. Its design screams that it is targeting a younger demographic that doesn’t want a the bleak look of the T50RP and won’t be using it in the studio. It also has the sound signature and forgiving sonic quality of a headphone you can take on the go like the Focal LISTEN. Yet it comes with a 2m cord ending in a quarter inch jack. I personally would have preferred the Blue to have a 1.2 to 1.4m cord terminating in 3.5mm. Thankfully this is possible as the headphone, just like the base T50RP, comes with a detachable cable mechanism. A popular mod is to use the angled Vmoda cable or the one officially from Fostex ending in 3.5mm.

The Blue is a complete redefinition of the T50RP MKIII. It’s stronger in every department and this time with a sound signature that is fun and more mellow for long term listening. That’s without mentioning the comfort which is out of this world; godly is one way to describe it. The Blue is $90 more expensive but characterizes its value in its considerably more balanced sound production and tri-material hybrid pads. Fans of the T50RP series or those that want a pre-modded Fostex official variant should definitely give the Dekoni Audio Blue’s a try.