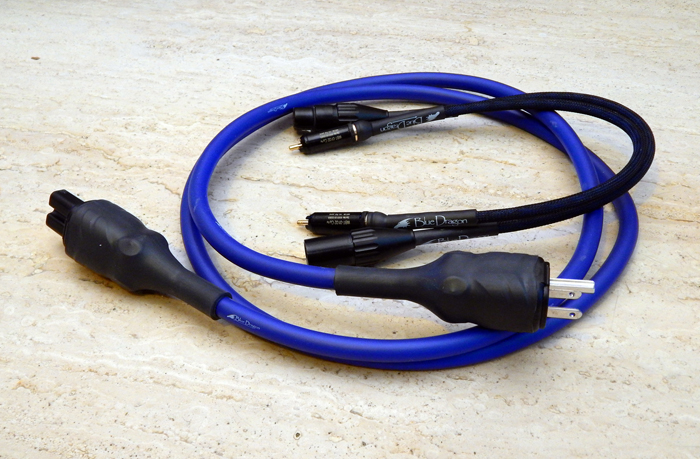 In celebration of the return of the amazing and popular Blue Dragon Power Cable, I had my good friends at Moon Audio send me a full complement of cables in order to do an in depth review. Having used their cables in previous reviews but not having done a cable review per se, I was very excited to have this opportunity to not only review what is an exceptional product, both in terms of performance and value, but to extol the virtues of proper cabling in general.

Many people in Personal Audio think of cables as being a tweak, a last step to eke that little bit extra out of their systems, they couldn’t be more wrong. As I have been telling people for over three decades, cables are an intricate part of the overall sound of your system and can have every bit as much impact as your DAC or amplifier, in fact they have many of the same issues as amplifiers; current capacity, phase linearity, phase coherency, noise floor and linear bandwidth (frequency response at different power levels), as well as a host of their own; resistance, impedance, capacitance and isolation, hence they should be accorded the same value in creating your system.

Part of what sets cables like the Blue Dragon apart from others is the embrasure of new technologies. Moon Audio’s Blue Dragon Power Cables are constructed of three 12 AWG stranded Ultra Pure Ohno Continuous Casting (UPOCC) copper conductors which are double shielded with a single aluminum foil shield and secondary silver plated copper 100% coverage shield encased in CL3 insulation and a PVC jacket. Special attention has been made to improve the flexibility of the newly rereleased cable, the outer jacket has been rendered much more pliable and even the geometry has been changed reducing the outer diameter from 12.5mm to around 11mm. (Ohno Continuous Casting is a process where the copper is extruded very slowly to cast as an almost perfect single crystal small diameter conductor.) For termination you have a choice of Cardas Rhodium male and female connectors (Cardas power connectors feature a copper base with a Rhodium over Silver plating), or for a small upgrade fee you can get Furutech FI-28 (R) Connectors (utilizing α (Alpha) pure-copper rhodium-plated conductors). For the Shuko EU or European connector option they offer the Furutech FI-E38 (R).

The result is a cable with high current capacity with extreme rejection of external EMI (electromagnetic interference) and suppression of EMF radiation, which is everything you want a power cord to do.

Also treated to an all new design is the Blue Dragon Interconnect. Whereas the previous models used a silver based conductor, the new cable uses 24 AWG UPOCC copper conductors like the Blue Dragon Power Cables to maintain the same neutral tonal balance as the rest of the Blue Dragon line. The Blue Dragon Interconnect is also double shielded with both a foil layer and a 100% multidirectional braided wire shield, yet is extremely flexible, enough so to work in shorter lengths for stacked equipment. A selection of terminations are available including Cardas GRMO RCA, WBT Nextgen RCA (copper), WBT Nextgen RCA (silver), Neutrik NC3-B XLR and Furutech FP-701/702 (XLR).

It is the job of an interconnect to do nothing to the signal, essentially you want the signal to pass unchanged from component to component, and this is the philosophy adopted by the Blue Dragon designers. Thus their goal is to produce a cable that is very resolute without introducing sibilance or edginess to the sound while providing a tight controlled bottom end. Which translates to; wide linear bandwidth, excellent phase coherency and phase linearity, extreme EMF rejection and high current capacity, a very tall order indeed.

Hook up was a breeze, the power cables are indeed flexible and the terminations are of a reasonable size, so that they will fit on a standard four gang outlet, and there was no problem fitting them to the stacked units. Many cables I have used in the past have terminations that are so ridiculously large that they hampered stacking the units, and in one case the cables were so stiff and heavy and the terminal so bulky that it actually broke the connector on the DAC I was using at the time. Some may think that all cables look alike, but many in my experience look like they were made in someone’s basement, I found the Blue Dragon Power Cables exceptionally well constructed and very professionally terminated. As for the Blue Dragon Interconnects they were beautifully executed in their Techflex braiding outer jacket (I understand that the Blue Dragon Power Cables can be special ordered with the Techflex braiding so that the cables would match in appearance). The same goes for the Blue Dragon USB and Headphone cables though I would like to note that I especially liked the light weight of the Blue Dragon Headphone cable, as many of the aftermarket cables I have auditioned were so heavy I had to balance them on my lap so as to not have them tugging at the headphone the entire time.

The first thing I noticed was a significant increase in current capacity, which translated into about a 5dB increase in volume (for a given volume setting) and probably twice that to dynamic range due to a complementary drop in noise floor. Hence I found myself comfortably listening to Yes’ “And You And I — I. Cord of Life, II. Eclipse, III. The Preacher the Teacher, IV. Apocalypse” (Close to the Edge – DSD) at much higher volumes than I would normally, making the experience feel a lot more live and realistic. I picked this track specifically for a quiet synthesizer passage that drops deep into the subsonic range in the background behind a much louder acoustic guitar, and as expected the sub-bass was much more robust and extended deeper than with the factory power cables. The bass guitar was rich throaty and lifelike while the acoustic guitar was crisp with that steel string buzz.

Moving on to Eiji Oue and the Minnesota Orchestra performance of “The Firebird Suite” (Stravinsky – DSD), the neutrality of tone, as well as the phase linearity and coherency were obvious in the increased resolution and the naturalness of tone, offering up superb pinpoint imaging in an extremely large soundstage, with an extreme amount of air around the instruments, making identification easy with not only tonality but placement. While the soundstage was very three dimensional, with great depth, the width of the soundstage and the epic dynamics put you in a box seat only feet from the stage. The symmetry of the horns and tympanis had great impact showing significant low frequency control.

Dusty Springfield’s voice was sweet, seductive and intimate as she sang “The Look of Love” (Casino Royale – 24/192 kHz), with the piano rich and vibrant off to your right and the upright bass and drums to your left and Herb Alpert on the trumpet just a little bit behind Dusty. The sense of a large nightclub was palpable and the horns were full but not overly brassy.

There is no question that Moon Audio’s Blue Dragon Power Cables enhanced the performance of the system, providing ample clean electricity, resulting in more dynamic headroom and a lower noise floor and plenty of current to support greater control and extension on the bass. And the Blue Dragon Interconnects fully realized their goal of disappearing and letting the components speak for themselves. The overall sound of the Blue Dragon Cable family brought the best out of my system without adding anything of their own which is everything a cable is meant to do.