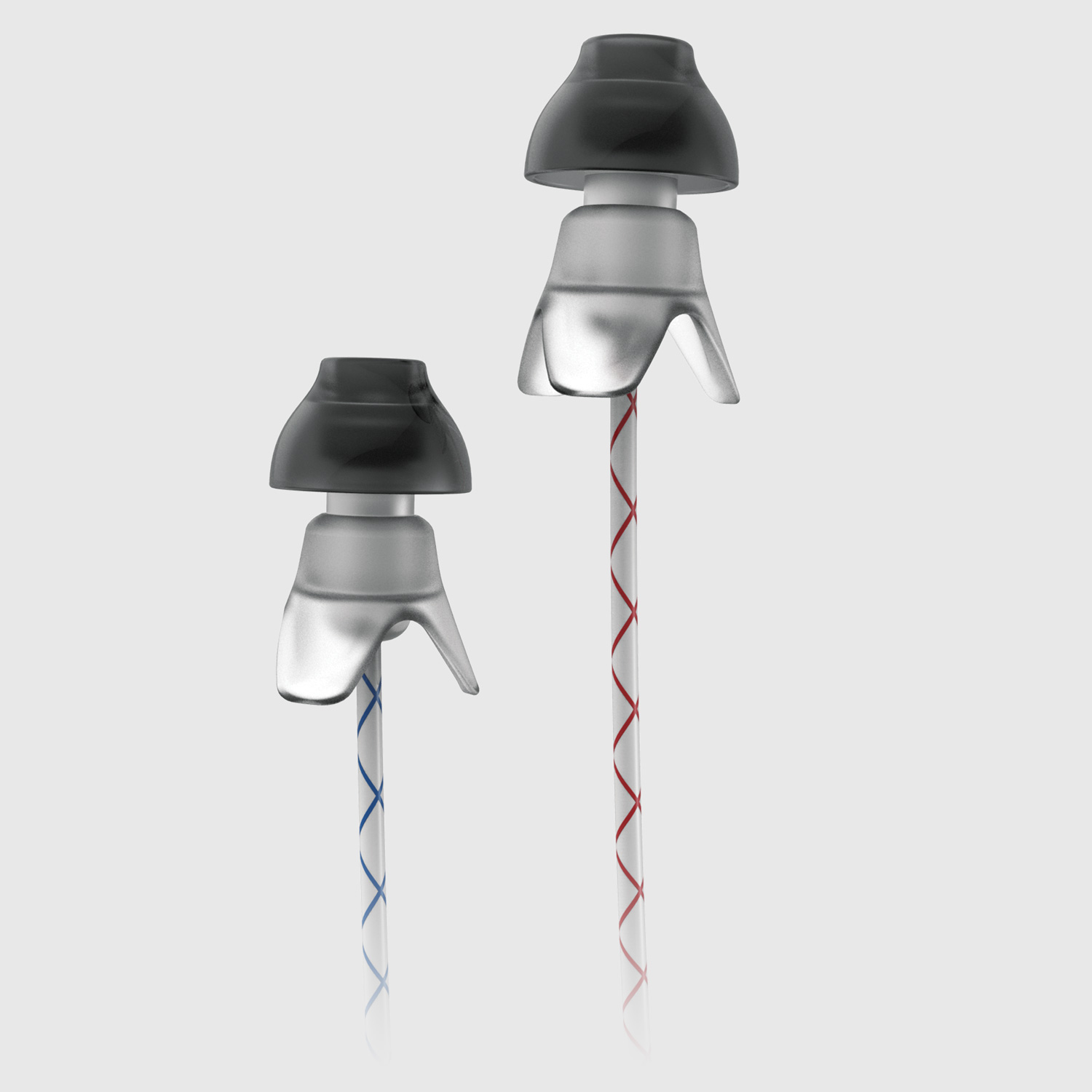 Aurisonics defines itself with the mantra: “great sounding IEMs for the masses”. Over the last few years they have grown from a one-man operation, founded by Dale Lott, to a multi-employee start-up that now caters to an international customer base. A quick visit to the Aurisonics website and you will witness a wide variety of products, both custom and universal models. You can order a wide variety of products, ranging from the entry level ASG 1.5 universal ($349.00 USD) to the flagship custom model, the AS 2.5 ($999.00 – $1299.00 USD). Not one to rest on their laurels, Aurisonics wanted to further push the envelope and give the music loving masses even more performance/value for the money. A lot of design work and a successful kickstarter fund raising drive later, the Aurisonics Rockets were born, (MSRP $249.00 USD for the non microphone version and $299.00 USD with mic).

The goal behind the Rockets wasn’t to simply design another “decent” sounding upper-entry level universal. Instead, it was to design a great sounding universal IEM that could withstand excessive punishment, was easy to pop into your ears, and be used in almost any situation. In short, they wanted to design an IEM that was the ironman of the universal IEM world. I could waste a ton of virtual ink further describing the vision behind the Rockets but, personally, I think video is worth a thousand words.

I was a little sceptical when I first saw the Gallagher Test video. Me being me, naturally cynical, one night I walked outside to my garage, threw my Rockets review unit onto an old wooden table, grabbed a small mallet I had lying around, and gave them a few good, solid firm hard wacks. The old table showed indentations and scuffing from my test but the Rockets titanium housings were no worse for wear. I then plugged them into my AK120 and they sounded as good as ever. Considering I don’t own the Rockets, I was quite relieved the Gallagher video wasn’t bogus and I wasn’t on the hook for replacing a broken $250 IEM.

The industrial looking titanium housings themselves are incredibly small and compact. The size and shape of the housings are designed to act like a plug. Because of its minute sized housing the Rockets are probably one of the easiest IEMs (that I’ve reviewed) to attain a good fit as well as being one of the most comfortable I’ve worn. The only other universal IEM I’ve owned that comes close to the rockets easy fit and comfort would be my long gone UE700s. Even so, the Rockets with its far superior titanium housings and tri weave Kevlar cable are far and away superior in build quality, sound, and durability when compared to the UE700. To further improve fit as well as isolation the housings come fitted with a tri-star shaped piece of silicon called Tri-Tabs. The Tri-Tabs can be adjusted by sliding them back and fourth along the body of the housing resulting in a personalized fit, think depth of insertion. To boot, the Tri-Tabs also act as an anchor to combat the IEM from jarring loose during overly active periods such as jogging or weight lifting. Although waterproof, I wouldn’t go swimming or deep sea diving with them. But, if you’re weightlifting, running, or working outside in hot and muggy weather where sweat is an issue, the Rockets can and should easily withstand the moisture from body sweat caused by excessive activity.

The white tri-weave cable with blue and white markings is subtle to the touch and like the Rockets housing is well designed and thought out. From Y-split down, the cable is white with red and blue markings. From Y-split up, the right housings cable is white with red markings while the left housings cable is white with blue markings. Microphonics is nearly nonexistent when worn cable down and nonexistent when worn behind the ear cable up. Cable memory or lack thereof is excellent. The Y-split is small, unobtrusive, light, and solid. The adjustable neck cinch is white and red coloured, is easily adjustable, and most importantly does what it was designed for; it stays put once adjusted. When wearing the Rockets cable up a set of loops, called Antiloops, which are provided with the IEM, can be installed on the housings. Once the IEM is inserted into the ear and fit is attained the Antiloops can be adjusted accordingly for routing the cable more comfortably behind the ears. Travelling down to the end of the cable we have a white 45-degree, 1/8 inch gold plug with an excellent beefy strain relief. Overall, generally speaking, the Rockets are built like a tank. If I were to pick out one possible flaw though it would be the strain relief’s where the housings are wired into the cable itself; there aren’t any. Personally, I think in this day and age strain relief’s on the housing end is a necessity. Whether this is a design flaw or whether the cable itself is just wired into the 5.1 mm micro dynamic driver more solidly then the average IEM remains to be seen. Personally, I would have liked to see some sort of strain relief on the housing end.

The following sound impressions were noted using the Ultimate Ears Reference Monitor as a benchmark. DAPs used were the iPhone5, iPod Classic, AK120, and CalyxM. Please note, the Rockets, due to its sensitivity, is not the type of IEM I would class as amp dependent. Therefore, acceptably good sound can be attained through your mass market DAP or run-of-the-mill phone, such as an iPhone. Even so, I did find that when amped by the AK120 or CalyxM the Rockets did seem to scale up. Also note, my review pair were the non-mic version. Source material was a mixture of 16 bit/44.1kHz and 24 bit/192kHz. Some of the source material used for evaluation was 24-bit binaural recordings along with albums such as: RAM by Daft Punk, Night At The Pawnshop, the Avatar Soundtrack, DJ Kicks by Kruder and Dorfmeister, Fleetwood Mac Greatest Hits, Free by Office Of Strategic Influence, Stoa by Nik Bartsch Ronin, and Up Close by Ottomar Liebert & Luna Negra.

The Rockets easily falls into the realm of a neutral sounding IEM with a touch of warmth and a nice smooth feel.

The mids are linear, forward, and detail is excellent; easily above par for this price bracket. Although not as detailed as my Ultimate Ears Reference Monitor it quite nicely matches up, detail wise, with other pricier IEMs such as the Noble Audio 4. Albeit smooth, it’s far from what can be described as mellow and PRAT is excellent coupled with a bit of aggressive grit for good measure due to its rather quick note decay coupled with a note presentation that’s neither to lean or too fat. Electric guitars have a very satisfying crunch; the Rockets are an excellent IEM for nicely recorded rock music. Although forward, vocals aren’t annoyingly overly in your face. Matter of fact, vocals sounds rather spectacular. Transition into the lower highs is excellent; avoiding any unwanted peaks, meaning vocal presentation isn’t overly sibilant.

The highs are controlled, extend acceptably well with a very slight roll off in the very upper registers, have good air, and resist sounding overly jarringly energetic. The end result is a smooth energetic upper frequency response that avoids sounding overly shrill, thin, and metallic. Although I can easily class the Rocket highs as energetic I doubt most people who are sensitive to treble spikes would find the Rockets grating.

The bass is a nice three-hits bass that extends deep, has a touch of reverb in all the right places, and although boarders on lush does it never sounds overly bloated and messy. Although full sounding the low frequencies are still detailed, again, one of the best I’ve heard in detail for this price bracket, due to a quick note decay and excellent control that does not allow any bleeding into the lower mids. If that’s not enough, the lows can punch, thump, and slam quite nicely when the music demands it.

Sound staging is very out of your head and boarders on large, albeit, not the largest I’ve ever heard. Sound staging is a full 360-degree audio 3-D presentation with lots of air between instruments, great width and height, and above all excellent depth resulting in excellent layering. Once again, easily above par for this price bracket.

If you’re in the market for an IEM designed to be used in almost any situation, easy to fit, is super comfortable, built to withstand whatever punishment you dish out for years, and sound good enough to be classed as audiophile grade, the Aurisonics Rockets are a no brainer.