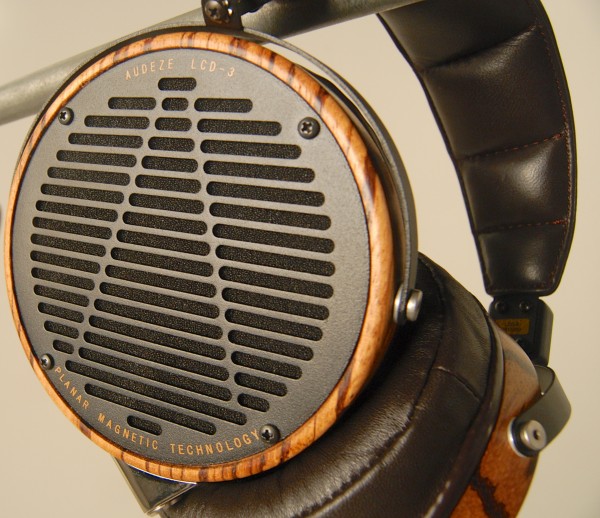 Usually reviewers aren’t worried or fearful of new gear.  I’ve heard a lot of high-end products in audio over the last few years and, for the most part, become accustomed to the sound of high fidelity headphones.  Every now-and-then, however, something comes along that makes you think ‘maybe this product is better than what I already own?’.  I always did want to hear a planar magnetic headphone but had never gotten the chance partly due to the fact that I live on a small island and $2,000 headphones are hard to come by.

Being an active member on Headfi.org for over the last three years makes it nearly impossible to avoid hearing about the LCD range of headphones designed by Audeze.  The company is one of the most well respected and revered headphone manufactures in the world. On a par with Sennheiser (at least when it comes to designing the best of the best).  So, as you can imagine, I was elated to even be considered in reviewing the LCD3f.  Being excited is one thing but as the days passed and I waited for the headphone to arrive and uncomfortable feeling of anxiety set in.  To be honest I was worried that the LCD3f would be everything that my HD800 wasn’t and I was afraid that I would want it.  In fact I was convinced that once I heard this headphone I would start saving for purchase.

Of course, if I had all the money in the world, none of these feelings of dread would be present and I could buy both headphones.  I, unfortunately, don’t have all the money in the world – I’m still a student and had decided sometime last year that I was a one headphone kind of guy.  So I set out to build a rig around my beloved Sennheiser HD800.  I use a Woo audio WA5 for amping and can safely say that this amp easily brings the best out of any headphone with the right tubes.  Unfortunately for me that also meant the LCD3f.  So if it turned out that I preferred the LCD3f over the HD800 then I would have the sell the later… keeping two $1.5K+ headphones as a student is not an option.

The design of the LCD3f is unmistakably retro.  The leather headband and pads coupled with steel and wood finish of the ear cups lend themselves to 60’s and 70’s headphone design.  Some of my friends think they look like really well designed ear defenders and I suppose there are some similarities.  The LCD3f looks like the kind of headphone that are built to last.  Only the best materials are used – the leather is real leather and not some cheap imitation. Audeze also offers a micro suede option for people not comfortable with Lambskin leather.  The wood on the cups is East Indian Rosewood.  I am familiar with tone woods because I play guitar and my acoustic has Indian Rosewood back and sides.  There are two types of rosewood that are usually used by luthiers in instrument making.  These are called ‘true rosewoods’ and ‘other rosewoods’. Within the ‘true rosewood’ category are Brazilian and East Indian – these are used for their excellent sonic properties.  When I unpacked the LCD3 I knew straight away that the wood on the cups were made with the best type of East Indian Rosewood.

Audeze have managed to assemble the wood, steel and leather in a way that compliments its slightly bulky design.  The LCD3f is without doubt the most beautiful headphone that I have ever held. Pictures simply don’t do it justice.  It is very hard to photograph the grain in rosewood because it reacts a certain way in sunlight, it really needs to be seen to be appreciated.

The introduction of the new patented fazor technology has, according to Audeze, allowed the LCD3f to reach levels of clarity, focus and holographic imaging previously unachievable with the older model (LCD3c).  The fazor placed on top of the magnetic driver allows the sound waves to move freely without interference creating a clearer detailed soundscape.  As a result of adding the fazor the LCD3 becomes much more efficient and the impedance reaches 110 Ohms.  This is a huge advantage to Audeze and anyone thinking of purchasing the headphone as it makes the LCD3f easier to pair with other amplifiers.  My woo Audio WA2 OTL was capable of driving the headphone to loud volumes without exhausting the volume wheel.  The added efficiency is a very clever way of not only adding higher fidelity but also enlarging their customer base.

Against all the odds my initial impressions of the sound of the LCD3f were rather underwhelming. This was a big surprise to me. I was convinced the headphone would sound amazing with older recordings because of its warmer sound signature. While it was very forgiving on tracks like – Billie Holidays “Day in, Day out” managing to tame the vocal harshness present in the song that is almost unlistenable on the HD800; it still felt slightly congested with the LDC3f. It was almost like there was too much detail squashed into a small space – the soundscape in comparison to the HD800 and Beyer T1 seemed too mid-centric, not in tone but in placement. The headphone struggled to move sounds far to the left and right. It also sounded too slow and slightly muddy.

I was slightly annoyed and at the same time relieved at the headphone’s performance. I still preferred my HD800 and concluded that my ears must a like brighter sound with expansive and airy sound staging. At this point I decided not to purchase the headphone as I felt that, for me, its performance was not near the HD800.

While all this was happening I was chatting on forums to friends and fans of the LCD3f. They had been saying that I would need to upgrade my amplifier from stock tubes to something more complementary to the headphones specifications. Most people prefer these headphones with solid state amplifiers as opposed to tube design. I had no intention of purchasing another amplifier anytime soon so I decided to upgrade my WA5 stock to – EML 300b – TS BGRP – Brimar 5Z4GY. Honestly I didn’t think that the tubes would improve the headphone to a point where I would reconsider my opinion but I ordered the tubes anyway as I planned on the upgrade eventually.

It was my belief that because the HD800 and T1 sounded so good with the WA5 stock tubes there was no reason why the LCD3f would not react the same way. Oh how everything changed when the tubes arrived.

It was funny how it happened actually. I had the tubes for a whole 3 days and never plugged in the LCD3f because the sound was so good with HD800. Then while in my room deep in a listening session my friend walked in and said – “Eh paddy? You going to try those planar’s with the new tubes or what?” I replied that I wasn’t too bothered with the LCD3f but my friend persisted and I plugged them in.

The next couple of minutes were some of the most exiting in all my time as an audiophile! The headphone went from being sludgy to pristine! In fact it was like listening to a completely different headphone all together. Things only got better as the tubes were burned in. The EML 300b’s really made the difference with this headphone. The soundstage was instantly enlarged but most importantly for me the separation was greatly improved. The headphone no longer sounded congested and instruments could be heard with a vividness that was not there before. Now I understand what Audeze means when they say that the fazor enhances this headphones holographic imaging. The soundscape went from being flat to 3 dimensional and the dept in sound and tone was really impressive. Lower midrange, upper bass and lower bass were simply stunning. This headphone has an ability to control the lower registers like no other I have heard. On the John Lennon album ‘Imagine’ the track ‘crippled inside’ just sounded amazing. The acoustic guitars on the track were presented in high detail whilst still keeping them from becoming too cold. And Lennon’s vocal was shockingly real!

Right around the time all this began to happen with the headphone the 40th anniversary of Led Zeppelin’s Physical Graffti announced a remaster of the album by non other than Jimmy Page. I had previously purchased the first three albums also remastered by Page. Jimmy has worked miracles here. The albums sounds so good in Hi Res. Physical Graffiti is easily my favourite Zeppelin album and was infinitely improved by the LCD3f. The LCD3f, for me, is perfect for classic rock. It adds that needed warmth to treble heavy guitar tracks that are common on 70’s rock albums. On the track ‘Kashmir’ and throughout the album Jimmy uses a Dan electro DC 59. This thing with the wrong headphone can be a treble nightmare. Its shrill sounding with the Beyer T1 and slightly piercing with HD800. I find myself turning the volume down with these headphones and trebly rock tracks. However with the LCD3f this is not a problem. The headphone just seems to add enough warmth down below and pulls the treble back enough to make for a really enjoyable listen. I can crank the volume high and have no negative side effects.

Another album that seemed to cause me bother with HD800 because of vocal and trumpet harshness is Louis Primas Capitol Collector Series. The track – ‘Angelina Zooma, Zooma’ can be very taxing on the ear. The treble on his vocal is rather hot with most headphones. I have found that reaching for a midfi headphone like the Beyer Dt880 or Sennheiser HD650 at times like this can be a move in the right direction because of those headphones having roll off in the treble region. Here is where the LCD3f really shines. Somehow the headphone manages to attain that beautiful tone and warmth of the HD650 whilst adding refinement, fidelity, power and detail. It does all this without any treble glare whatsoever which is truly an amazing feature in headphone design.

My time with the LCD3f was a bit of a roller-coaster going from underwhelming to overwhelming. This headphone, in the end, lived up to the hype that surrounds it. While I can say that it won’t replace my HD800 it still left me wondering if any headphone can deliver everything an audiophile needs. For rock, EDM, soul, funk and older recorded music I have not heard anything better than the LCD3f. In my opinion it is just below the HD800 for jazz, classical and acoustic music. If I have learned anything while reviewing this headphone it is that amplification is of the utmost importance. The LCD3f is not known as a finicky headphone for pairing with other gear unlike its counterpart the HD800 but I found that rolling tubes in my amplifier brought this headphone from bland to brilliant. For anyone out there thinking of auditioning one just be sure to give this headphone the respect it deserves.

Billie Holiday – Day in day out